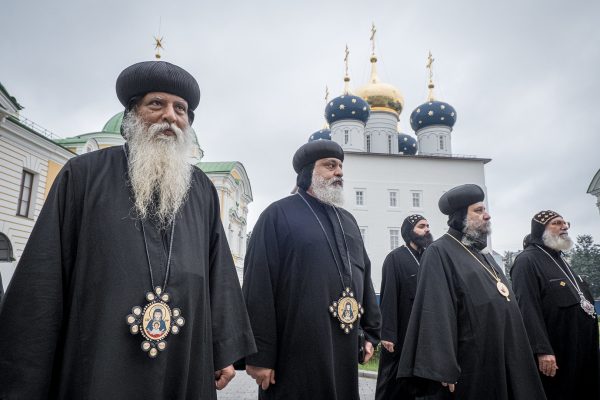 On August 26-28, 2021, a delegation of the abbots and monks from the monasteries of the Coptic Church, on a pilgrimage in Russia, visited churches and monasteries in the Tver and Novgorod dioceses.

On August 26 they arrived in Tver, where they had a meeting with Metropolitan Amvrosy of Tver and Kashin, visited the cathedral church of the Resurrection of Christ, the church of the Life-Giving Trinity and got acquainted with the restoration works of the cathedral of the Transfiguration of the Lord, one of the oldest churches in Tver, the history of which dates back to the end of the 12th century and which was destroyed in 1935. The guests also visited the “Tver Travel Palace” museum complex exhibiting many articles related to the history of Orthodoxy in the Tver land.

Metropolitan Amvrosy gave a reception at the Tver diocesan administration in honour of the delegation from Egypt. Attending the reception was Irina N. Aksyonova, the head of the Tver branch of the Imperial Orthodox Palestine Society and rector of Tver “Verkhnevolzhye” Institute. Addressing the participants with his warm greetings, the archpastor mentioned his visit to Egypt in May 2019 at the head of a delegation of teachers and students of the Moscow Theological Academy within the framework of the Commission for Dialogue between the Russian Orthodox Church and the Coptic Church.

Vladyka Amvrosy awarded a medal (1st class) of St. Simeon, the first Bishop of Tver, to Anton Milad, special representative of the Coptic Patriarchate and a member of the delegation, in recognition of his significant contribution to the development of Russian and Egyptian spiritual traditions and in connection with his 70th birthday. Irina N. Aksyonova read out a message of greetings from the IOPS Chairman Sergey V. Stepashin to the visiting representatives of Pope and Patriarch Tawadros II of the Coptic Church.

Metropolitan Amvrosy of Tver and Kashin together with the delegation saw paintings by well-known Tver artist Lyudmila G. Yuga at a display “Egypt. Copts. Portraits of Monks from St. Anthony’s Monastery,” organized on the premises of the diocesan administration. The artist told the guests about her visit to Egypt, a land that had become the source of inspiration for her as she had been working on the displayed paintings.

On August 27, the delegation of the Coptic Church was at St. Nilus’ Stolobensky hermitage on Lake Seliger and visited the Zhitenny Convent of the Mother of God in Ostashkov. Members of the delegation were warmly welcomed by mother-superior Elisaveta (Evdokimova) with the sisters. She told the visitors about the history and today’s life of the convent and showed them the miracle-working “Odigitria” icon of the Mother of God of Smolensk, the church over-the-gate and the residential buildings, took them to the convent’s charity house. Living there are single mothers with children, elderly people and invalids who had lost their homes and needed help which they had found in the convent. Bishop Bigol, the head of the delegation, presented mother Elisaveta, the sisters, and the inhabitants of the charity house each with an icon of St. Macarius the Great.
That same day the delegation arrived in the Novgorod diocese, wh ere their first stop was at the Valdai Holy Lake monastery of the Mother of God of Iberia. The guests were welcomed there by Vicar Bishop Arseny of Yuryev and the father-superior, hieromonk Antony (Bitmayev). The Egyptian monastics venerated the miracle-working icon of the Mother of God of Iberia.

In the evening the pilgrims came to Veliky Novgorod. At the Yuriev (St.George’s) Monastery, one of the oldest monasteries in Russia, Vladyka Arseny took the guests on an excursion about the Cathedral of the Transfiguration of the Lord, which is a world cultural and historical heritage site. At present, this shrine is under meticulous restoration. Bishop Arseny gave a reception in honour of the visiting abbots and monks from the monasteries of the Coptic Church. In the course of their brotherly talk, at the request of the guests, the bishop told them about the ministry of the Russian Orthodox Church today and about its history, mentioning in particular that the Novgorod land had played an important part in it.

On August 28, the feast day of the Dormition of the Most Holy Mother of God, the members of the delegation attended the Divine Liturgy celebrated at St. Sophia’s Cathedral in Novgorod by Metropolitan Lev of Novgorod and Staraya Russa.

At the end of the divine service, the head of the Novgorod diocese addressed the representatives of the Coptic monasticism with greetings, saying, “We heartily greet you at St. Sophia’s Cathedral, the most ancient Russian church, housing a venerated “Sign” icon of the Mother of God. The Most Holy Mother of God took our city under her omnipotent intercession many times; and countless times her intercession spread throughout our Rus’.” Actually, Her Protecting Veil is invisibly covering the whole world, and the Egyptian land, as the origin place of monastic life, in particular.”

Metropolitan Lev also pointed out the similarity of the historical destiny of the Russian Orthodoxy and the Egyptian Christian tradition: “The Ancient Coptic Church gave birth to a great host of saints. Many of them accepted death for their faith. Nowadays the Coptic Christians continue to witness their faith through the death of the martyrs. The same was the way of the multiple new martyrs of the Russian Church who were forced in vain to reject the Lord. The very fact of such willingness to accept the crown of martyrdom is a proof that we all are brothers in Christ,” said Metropolitan Lev.

Speaking in return, Bishop Bigol thanked Metropolitan Lev for his kind words and heartfelt welcome and assured him of sincere love of the Coptic people for Russia and the Russian Church. “We know that the Russian land is glorified by the extraordinary strength of the faith,” underscored the Coptic bishop, and continued to say: “In your country, we have found a living continuation of the true monastic tradition. We are grateful to God for active development of relations between our Churches under wise and unyielding leadership of our Primates: His Holiness Pope Tawadros II and His Holiness Patriarch Kirill.”

Metropolitan Lev handed over a copy of the “Sign” icon of the Mother of God as a gift to Pope Tawadros and presented the members of the delegation with memorable souvenirs.

After that the guests from Egypt went on a tour about the Novgorod Kremlin.

Metropolitan Lev of Novgorod and Staraya Russa gave a reception in honour of the delegation at the Khutyn Convent of the Transfiguration of Our Saviour. The guests told the head of the Novgorod diocese about the work of the Commission for Dialogue between the Russian Orthodox Church and the Coptic Church and about some of the Commission’s projects dynamically realized in recent years. Metropolitan Lev wished them God’s aid for common work and took note of the rich history of this interchurch dialogue. He said that Coptic Christians had been often mentioned as the bearers of the Egyptian monastic tradition by St. Dimitry of Rostov, St. Tikhon of Zadonsk and Archimandrite Porfiry (Uspensky). The archpastor recalled active development of contacts between the Moscow Patriarchate and the Coptic Church in the second half of the 20th century that began thanks to the efforts of Metropolitan Nikodim (Rotov) of Leningrad and Novgorod, a teacher of Metropolitan Lev. He shared his reminiscences of his visit to Egypt and meetings with representatives of the Coptic Church during Patriarch Pimen’s visit to the country in 1972.

The guests from the Coptic Church are accompanied by Hieromonk Stefan (Igumnov), DECR secretary for inter-Christian Relations; Hieromonk Daud el-Antoni, representative of the Coptic Church in Moscow; and Hierodeacon Petr (Akhmatkhanov), a DECR staff member.