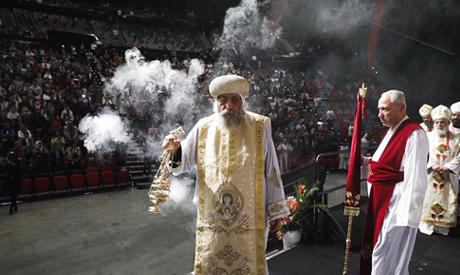 During the divine liturgy at the International Convention Centre Sydney, Pope Tawadros II promoted six new priests to arch-priests of the Sydney Diocese into the Order of Christ.

Pope Tawadros arrived in Sydney Tuesday after a short visit to Japan where he inaugurated the first Coptic church in the East Asian country.

During his two-week visit to the Australian cities of Sydney, Canberra and Melbourne, the Pope is expected to meet with top Australian political and religious figures.

The new church will cater to the growing numbers of parishioners and include community facilities.

It is expected to be completed in five years.

The pontiff will also give a number of masses and meet with Australia’s Coptic community members.

Tawadros II is head of the Coptic Orthodox Church, which has an estimated 25 million members worldwide.