Source: Agenda.ge
Natalya Mihailova | 08 October 2016
Head of the Georgian Orthodox Church, Catholics Patriarch Ilia II has cast his vote and has appealed to all Georgian citizens to also have their say on who they want to run the country. 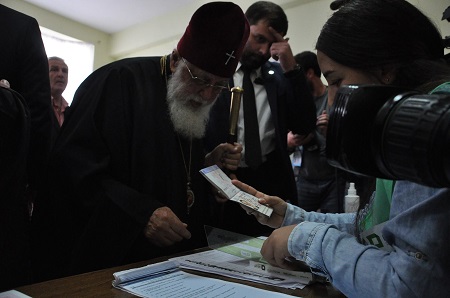 “I congratulate the whole Georgia on this day and I appeal to all, to the whole population, to participate in the elections and vote. God bless Georgia,” the Patriarch said.

Today the people of Georgia will vote to elect the 150-seat Parliament of Georgia, 77 members through party lists and 73 in the majoritarian districts.

19 political parties and 6 election blocs are also running in the race.

People will also vote to elect lawmakers in the 21-member Supreme Council of Adjara, Georgia’s western Autonomous Republic, in Resix election constituencies, as well as local authorities in some locations, as several local officials had to quit posts for their participation in the elections.