The Enthronement of Bishop Irénée at the Ottawa Cathedral

Source: OCA
Natalya Mihailova | 29 November 2014
The Enthronement of His Grace, Bishop Irénée as Bishop of Ottawa and the Orthodox Church in America’s Archdiocese of Canada will be celebrated at Annunciation/Saint Nicholas Cathedral here on Saturday, November 29, 2014. 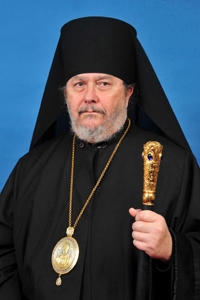 His Beatitude, Metropolitan Tikhon, will preside at the Divine Liturgy and the Rite of Enthronement, during he will present the archpastoral staff to Bishop Irénée.  A celebratory banquet will follow at the cathedral.

Bishop Irénée, who had been serving as Administrator of the Archdiocese of Canada, was elected by the Holy Synod of Bishops on October 21, 2014.  Three weeks earlier, he had been nominated by delegates to the Extraordinary Archdiocesan Assembly held in Gatineau, QC.

Born in Montréal, Quebec on December 25, 1948, Bishop Irénée received a BA in Slavic Studies from the University of Ottawa in 1971, after which he began studies at Holy Trinity Seminary, Jordanville, NY. He was accepted as a novice at Holy Trinity Monastery and placed under the spiritual guidance of Archimandrite Kiprian. In 1974, he was tonsured a Rassophore monk. The following year, he was tonsured a Stavrophore monk with the name Irénée, in honor of the sainted hieromartyr of Lyons.

In 1992, Hieromonk Irénée was elevated to the dignity of Igumen by His Grace, Bishop Seraphim of Ottawa, to care for the French language monastics in Québec. He also served as a supply priest to the parishes in Montréal, Ottawa, Toronto and Québec City.