Epistle of His Holiness, Patriarch Kyrill, to the Entirety of the Russian Orthodox Church in Connection with Events in Ukraine 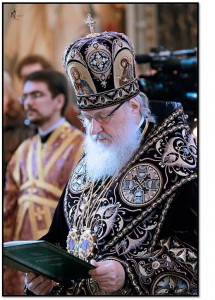 His Holiness Kyrill, Patriarch of Moscow & All Russia, released an epistle to the entirety of the Russian Orthodox Church in connection with recent events in Ukraine. With the blessing of the First Hierarch of the Russian Church Abroad, His Eminence, Metropolitan Hilarion, the attached special petitions and prayer are to be read at all divine services for Meatfare Soul Saturday and Sunday in the parishes and monasteries of the Eastern American Diocese.

Reverend archpastors and pastors, dear brothers and sisters – children of the Church!

It is with dismay, pain, and alarm that I have followed and continue to follow the events in Kiev and other cities of Ukraine. Kiev is the birthplace of a great Orthodox civilization, which united the peoples of Holy Rus’. Kiev is the city of the shared font of our Baptism, the 1025th anniversary of which we only recently celebrated with all of the Local Orthodox Churches. Kiev is a city particularly dear to me, a place I have visited often, a city that I love and know well. It is with unbearable pain that I receive word of the many victims who have died in this holy place, of the hundreds wounded, of the unrest in several of Ukraine’s regions.

The entirety of our multinational Church prays zealously for peace in the Ukrainian land, for the cessation of civil strife. Our brothers and sisters in Ukraine are currently undergoing one of the most dramatic moments in their entire history. The future fate of the Ukrainian people depends on the outcome of these events. So far, glory to God, the scenario of a civil war has been avoided. But such a scenario may still come to pass. And it will come to pass, if the Lord allows the people to fall away from the moral commandments given by God, and from the Christian heritage of Ukraine, if her citizens renounce respect for themselves, for one another, and for the law.

I would like to thank those representatives of the Ukrainian episcopate and clergy, who – amidst cries and slogans of every possible persuasion ‒ found within themselves the strength to consistently call the opposing factions to peace and brotherly love; those who firmly stand for the right of Ukrainians to live in accordance with their faith and piety, for the preservation of Ukraine’s traditional and religious values, the source of which is the Kievan Baptismal font, which determined the future development of the civilization of the peoples of Holy Rus’.

Mourning with all my heart the victims, commiserating with their loved ones, and empathizing with the wounded, I ask the pastors and children of the Russian Orthodox Church to lift up their prayers to our Lord Jesus Christ and His Most Pure Mother. Let us pray for the repose of our departed brothers and sisters, for the healing of the wounded and sick, for the softening of embittered hearts, for the cessation of discord and strife in Ukraine, and that the Lord might send down upon all of us the spirit of love, peace, forgiveness, and brotherly love in Christ!

+KYRILL
Patriarch of Moscow & All Russia