Erdoğan: Agia Sophia Will Never Be a Church as Long as There is Turkish People 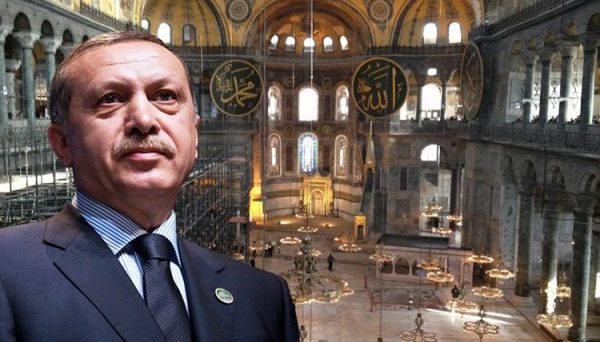 The shooter’s manifesto targets Turks and Erdoğan specifically, reports Egypt Today. “We are coming for Constantinople and we will destroy every mosque and minaret in the city. The Hagia Sophia will be free of minarets and Constantinople will be rightfully christian [sic] owned once more,” the text reads.

The Turkish President reacted to this statement, calling the murder a “scumbag, who dared to call the city by its former name.”

Agia Sophia will not be turned into a church again “as long as there is a Turkish people and soul,” Erdoğan continued. Romfea also noted that according to some Turkish media, the President “inadvertently called Agia Sophia” a mosque. It is currently officially considered a museum.

Although the former church is officially a non-denominational museum, Turkey has repeatedly allowed Islamic prayers to be read inside, angering the Greek and broader Orthodox community. In April, Erdoğan read out a prayer in Agia Sophia that he dedicated to “Istanbul’s conqueror”—Mehmed the Conqueror.

In 2017, the Turkish president announced that he would read prayers in Agia Sophia on Orthodox Holy Friday. Although in the end he did not read the prayers that day, the announcement could serve no purpose other than to anger Christians.

A Muslim cleric read from the Koran inside the Agia Sophia for the first time in 85 years in 2015, and the following year the Turkish government began airing religious readings during the Islamic month of fasting, Ramadan, and the call to prayer was read out and broadcasted on television to mark the supposed revelation of the Koran to the “Prophet” Mohammed.

The Greek Foreign Ministry called the reading on television last June “an unacceptable challenge to the religious sensibilities of all Christians.”

Islamic groups also periodically gather to read prayers outside Agia Sophia and call for its re-conversion to a mosque.

Meanwhile, Erdoğan has been using edited footage from the shootings, which had been live streamed online, at his election rallies “to galvanize support among his Islamist followers ahead of local elections at the end of the month and criticize the Turkish opposition as weak,” reports the New York Times.