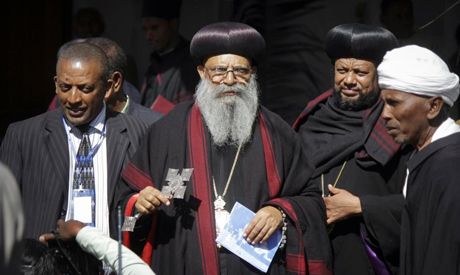 The Patriarch of the Ethiopian Orthodox Tewahedo Church Mathias I will visit Egypt for the first time on Saturday, the Egyptian Coptic Orthodox Church announced Monday.

The six-day visit came after an invitation from Pope Tawadros II of the Coptic Church, Al-Ahram daily reported.

The Egyptian and Ethiopian churches are seen to have played a role in the negotiations between both countries regarding the Grand Renaissance Dam Ethiopia is building on the Blue Nile, which Cairo is concerned could have an adverse effect on Egypt’s water supply.

The Ethiopian church was formerly an archdiocese of the Church of Alexandria but became autonomous in the twentieth century.

Ramsis El-Nagar, legal consultant to the Coptic Orthodox Church, affirmed the ties between both churches are very strong on a religious level, stronger than their political role.

“I think the role of the church in the negotiations is very important, more than the politicians’ role,” chief of the Education and Training Department at the Ethiopian Orthodox Church Aba Sereke-Birhan Wolde-Samuel who was part of the delegation told Ahram Online, explaining that the society trusts religious figures more than politicians.