Source: DECR
Natalya Mihailova | 20 July 2015
July 15, 2015 – the Russian Science and Culture Center in Bucharest presented a program devoted to the memory of one of the brightest statesmen of Old Rus’, as part of the events to honour the memory of the Holy Prince Vladimir Equal-to-the-Apostle, the Baptizer of Russia. 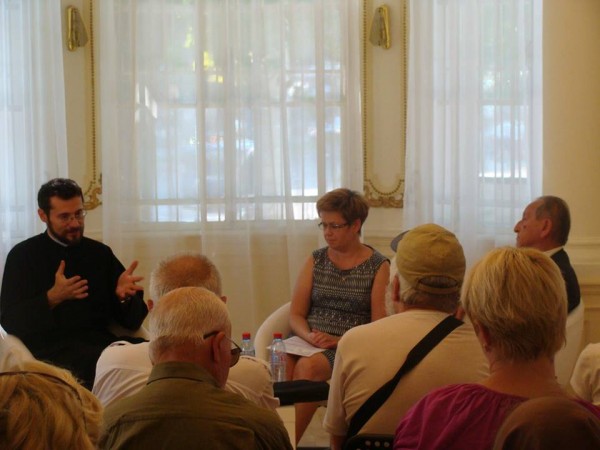 The guests saw the first part of the Romanian version of the documentary ‘The Second Baptism of Rus’ produced by Metropolitan Hilarion of Volokolamsk. The Baptism of Rus’ by Prince Vladimir Equal-to-the-Apostles as an event that influence the entire world history is related in the film to dramatic events of the history of our country intertwined with the history of the Russian Orthodox Church in the 20th century up to these days.

The program also included an exhibition of reproductions of classical paintings, frescos and icons illustrating events of the Baptism of Rus and reflecting the ideas of Rus that prevailed before Christianity was embraced.

In conclusion of the program, a discussion took place devoted to Prince Vladimir. Participating in it were Prof. Alexandru Barnea, Bucharest University, Rev. Eugene Rogoti, Romanian Patriarchate staff member, and Ms. Natalia Muzhennikova, director of the Russian Science and Culture Center in Bucharest.