Every tenth Russian to participate in Epiphany bathing

Source: Interfax-religion
Natalya Mihailova | 17 January 2015
Moscow, January 16, Interfax - Number of Russians who celebrate Epiphany on January 19 almost does not change in recent years: 41% this year against 42% in 2014 and 43% in 2013, the Levada Center reports to Interfax. 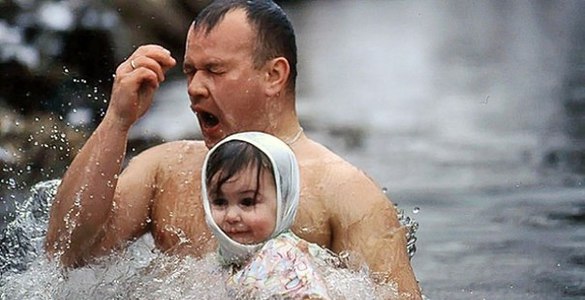 About 10% of people participating in the poll held on December 19-22 among 1600 residents in 134 Russian cities, town and villages, tell about their plans to bathe in Epiphany ice-holes.

On the day of the feast, 38% of respondents are going to take blessed water from churches and 23% will share a festival meal with relatives and friends.

Orthodox Christians celebrate Epiphany on January 19. Epiphany bathing is not compulsory, but is practiced as a pious tradition.