Exhibition of contest works for designing interior decoration of Cathedral of St. Sabbas in Belgrade opens at Russian Academy of Arts

Source: DECR
Natalya Mihailova | 25 September 2014
On 23 September 2014, an exhibition of contest works for designing the interior decoration of the Cathedral of St. Sabbas on the Vračar hill in Belgrade opened at the Russian Academy of Arts in Moscow. 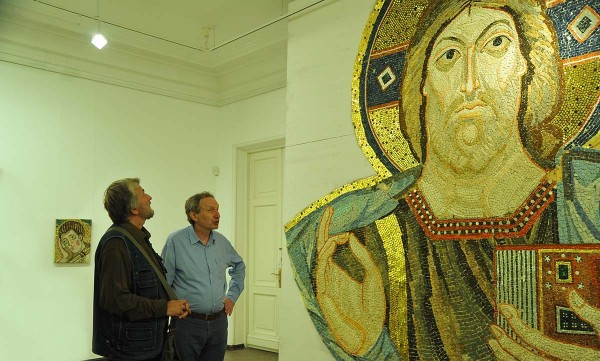 Among those who attended the event were H.E. Slavenko Terzić, Ambassador Extraordinary and Plenipotentiary of the Republic of Serbia to the Russian Federation; Mr. Alexander Konuzin, former Russia’s Ambassador to Serbia; Bishop Antonije of Moravica, representative of the Patriarch of Serbia to the Moscow Patriarchal See; and honoured art workers.

Mr. Slavenko Terzić, Serbia’s Ambassador to Russia, greeted all those present. Mr. Alexander Konuzin also addressed the participants in the event and emphasized the importance of the project which is to become a significant stage in the development of bilateral relations between Russia and Serbia and is to contribute to the strengthening of brotherly ties between the Russian and the Serbian Orthodox Churches.

As Bishop Antonije of Moravica noted, the Church of St. Sabbas is a symbol of Serbia, just as the Church of St. Basil the Blessed is a symbol of Moscow. On behalf of the Serbian Orthodox Church, Bishop Antonije expressed gratitude to the Ministry of Culture of the Russian Federation and the Russian Academy of Arts, which had organized the exhibition.

Taking part in the contest were professional artists from Moscow, St. Petersburg, Minsk, and Yarosalvl. On show are over fifty works, including plans, photographs, and mosaic icons. The exhibition will last until October 5.

The jury of the contest will gather at the Russian Academy of Arts on 6 October 2014. Mr. Ivica Dačić, Serbia’s First Deputy Prime Minister and Minister of Foreign Affairs, and Metropolitan Hilarion of Volokolamsk, chairman of the Moscow Patriarchate’s Department for External Church Relations, act as co-chairmen of the contest committee.