Experts register over 50 attacks on Ukrainian Orthodox churches, priests in 2014

Source: Interfax-Religion
Natalya Mihailova | 02 August 2014
Moscow, August 1, Interfax - Experts from the Russian Institute of Strategic Research have reported almost sixty attacks on churches and clergymen of the Ukrainian Orthodox Church of the Moscow Patriarchate since the beginning of 2014. 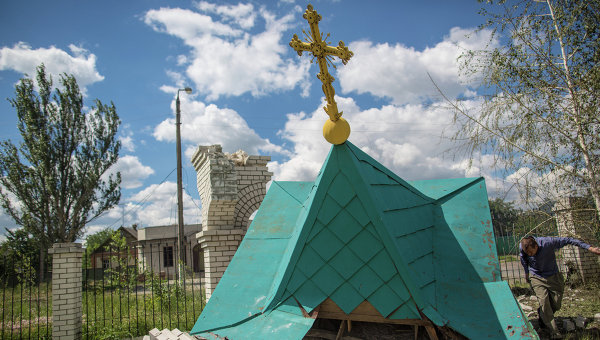 Specifically, they have registered 36 attempts to seize churches and attacks on churches in the Kiev, Ternopol, Kirovograd, Sumy, Chernovtsy, Zhitomir, Volyn, Vinnitsa, Khmelnitsky, Donetsk, Lugansk, Kharkov, Rovno, and Kherson regions, the press service for the Russian Institute of Strategic Research has reported.

The Russian Institute of Strategic Research has also reported threats of violence and attacks on priests and activists of the Ukrainian Orthodox Church in the Odessa, Sumy, Donetsk, Lugansk, Kiev, and Zaporozhye regions.

The experts said the facts collected by them “are just the top of the iceberg” and do not give a real idea of the frequency of attacks on churches and clergymen be cause “the Ukrainian secular and church media are not reporting on the real umber of crimes against the Ukrainian Orthodox Church of the Moscow Patriarchate and violations of the civil rights and freedoms of believers of the Moscow Patriarchate in Ukraine.”