Source: Press TV
The building of a highly respected Roman Catholic church in northern Isreal has been set on fire and offensive slogans have been scribbled on one of its walls by suspected extremists.
Natalya Mihailova | 18 June 2015 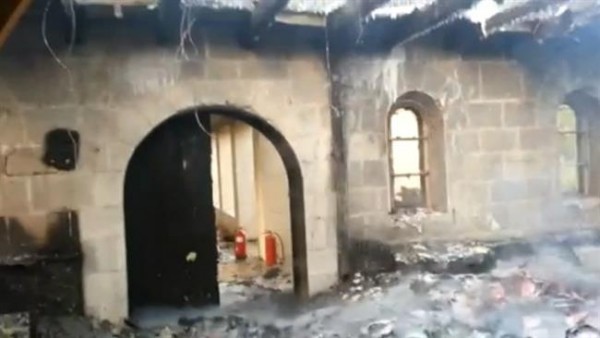 This video grab shows a burnt section of the Church of the Multiplication of the Loaves and Fish on the northwestern shore of the Sea of Galilee, Israel, on June 18, 2015.

According to reports on Thursday, extremists torched the Church of the Multiplication of the Loaves and Fish on the northwestern shore of the Sea of Galilee, writing Hebrew graffiti that were sprayed in red on one of its walls and denounced what they termed as “the worship of idols.”

Two people were also taken to hospital after inhaling thick smoke that had filled the area.

Micky Rosenfeld, an Israeli police spokesman, said the blaze has been put out; “however, both the interior and exterior of the church suffered extensive damage.”

He added that an investigation has been launched into the incident.

The Church of the Multiplication of the Loaves and Fish is greatly cherished by Christians, and serves as a traditional site of pilgrimage in Israel.

Earlier this year, a seminary building belonging to the Greek Orthodox Church was torched in East al-Quds (Jerusalem) in a hate crime attack by Israeli extremists.

The extremists torched an annex of the church building on February 26, writing graffiti that insulted Jesus Christ. No one was injured or killed in the sacrilegious incident.

The act of vandalism came a day after a mosque was set ablaze in the village of al-Jaba near Bethlehem in the occupied West Bank. The attackers sprayed anti-Muslim slogans on a nearby wall.

Israeli extremists have recently intensified attacks on Christian and Muslim holy sites in the occupied Palestinian territories. They have also desecrated al-Aqsa Mosque on numerous occasions with the support of the Israeli security forces.

Israel has tried to change the demographic makeup of al-Quds over the past decades by constructing illegal settlements, destroying historical sites and expelling the local Palestinian population.

Most viewed articles
Metropolitan Hilarion of Eastern America and New York to Be Buried in Jordanville on May 22229
Patriarch Kirill: The Peoples of Russia and Ukraine Have No Interest in the Conflict187
Communion restored between the Serbian Orthodox Church and the Macedonian Orthodox Church – Ohrid Archbishopric135
Metropolitan Hilarion of Eastern America and New York Reposes in the Lord131
What Do We Celebrate at Mid-Pentecost?112
Family Life and Spiritual Warfare79
Celebrating 100 Years with Paschal Joy72
Patriarch of Serbia to Concelebrate with Archbishop Stephen of Ohrid51
Concelebration of Divine Liturgy by the Serbian Patriarch and Archbishop of Ohrid in Belgrade (VIDEO)49
China’s Internet Clampdown Is Step Closer to ‘Cancelling Christianity’41
Most popular authors
Pravmir.com team782
Ioannis Foundoulis112
Archpriest Michael Gillis79
Priest Luke A. Veronis72
Donna Birrell41