Source: OCA
Natalya Mihailova | 29 May 2015
Faithful “from near and far” gathered during the Memorial Day weekend at Saint Tikhon’s Monastery here for the 111th annual Pilgrimage May 22 through 25, 2015. 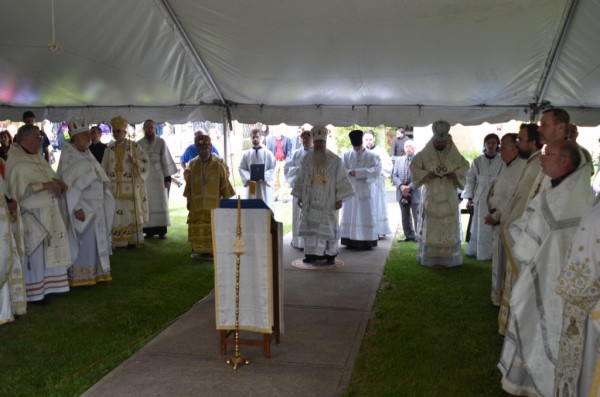 Throughout the weekend, liturgical celebrations, including Hierarchical Divine Liturgies on Saturday and Sunday, were held.  The main Pilgrimage Liturgy was celebrated at the bell tower chapel on Monday, at which His Beatitude, Metropolitan Tikhon, presided.  Concelebrating with him were His Eminence, Archbishop Mark of Philadelphia and Eastern Pennsylvania; His Eminence, Archbishop Michael of New York and New York and New Jersey; His Grace, Bishop Thomas of the Diocese of Charleston, Oakland and the Mid-Atlantic of the Antiochian Orthodox Christian Archdiocese of North America; and His Grace, Bishop John of Naro-Fominsk, Administrator of the Patriarchal Parishes in the USA, Moscow Patriarchate.  Numerous clergy from the Orthodox Church in America and other jurisdictions, also concelebrated.

Faithful also were afforded the opportunity to venerate the Hawaiian Myrrh Streaming Icon of the Mother of God of Iveron, which was welcomed at the monastery entrance arch on Friday afternoon, marking the official opening of the Pilgrimage, and present throughout the weekend.  And as always, faithful prayed before the graves of their loved ones in the monastery cemetery.

Many took advantage of tours of the Metropolitan Museum of the Orthodox Church in America and the Guzey Icon Repository offered by Archpriest John Perich, curator.  Father John also made it possible for pilgrims who so desired to share in writing or video their personal stories and anecdotes about life in the Church as a “living history.”

Not to be forgotten during the weekend were those departed who served in the military and who gave their lives on the field of battle.  Archpriest Theodore Boback celebrated a Panikhida at All Saints Bell Tower for all departed Orthodox military chaplains and veterans on Monday.

“I couldn’t help notice that there were many young people present this year,” said one pilgrim from New York.  “Having attended the Pilgrimage for over four decades, it was most heartening to see the ‘next generation’ present to carry on this century-old tradition.”

In conjunction with the Pilgrimage, Saint Tikhon’s Seminary held its 73rd annual commencement exercises on Saturday, May 23.  Additional information will be posted as it is received.

An interesting interview with Archimandrite Sergius, Abbot of Saint Tikhon’s Monastery, on the brotherhood’s preparations for the Pilgrimage may be accessed here.  A photo gallery may be viewed on the OCA web site and Facebook page.