Comparatively few Canadian youth have known real hunger and want, and have enjoyed arguably the best state-run social services and healthcare (not to mention generously endowed public education) for most of their lives. Ironically, it is this very lack of suffering, this lack of struggle, which has made North America perhaps the most difficult Orthodox mission field, apart from Western Europe.
Archpriest Geoffrey Korz | 06 October 2008 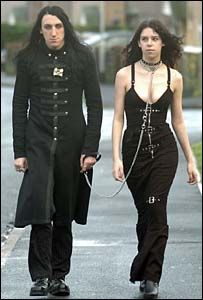 The demise of comfy middle class Orthodox Christianity is evident all around us. As spiritual life tries to accommodate modern secular life, the signs of spiritual erosion abound: personal prayer fades, the living transfer of Orthodox life from one generation to the next breaks down, weekly (especially weekday) attendance fades, and nametag-style Orthodoxy becomes the reality. Orthodox communities, which often appear strong on the outside, are collapsing from within.

In sharp contrast, where we find Orthodox life lived authentically in North America, the opposite is happening. Children of the lost generations, now in their twenties and thirties, are coming to the Church (one cannot say “returning to the Church”, since most have never been there from the start). The struggle to lead an ascetical Christian life is real, albeit imperfect. Young people, sick of the falseness of modern advertising, modern politicians, and modern religions, are drawn to the spiritual magnet of authentic Christianity. This movement, which saw its first light in the 1960s and 70s amoung punks-turned-monks on the American West Coast, has not been limited to North America. Lost generations in former Communist countries, particularly Russia and Serbia, are also setting aside the empty promises of secularism, and travelling on their knees – sometimes literally – to venerate the Cross of Christ.

One of the most vivid examples of this can be seen in the pilgrimage made by hundreds of thousands of children of the secular age to the relics of Saint Basil of Ostrog, in Serbia. The saint has appeared to scores of the lost generation of post-Communist youth, insisting they visit his monastery, where he reposed centuries ago. Ironically, many of the pilgrims were not simply young Orthodox who had lapsed from their faith; most have been victims of the godless materialism of their age, enslaved to the alcohol, drugs, and sex that their post-Christian regimes offered as a temporary escape from inevitable oblivion. Seeing this catastrophic loss of a generation, Saint Basil appears to have taken their salvation as his own labour.

The struggles of Canadian young people seem mild by comparison to the refugees of atheistic Communism, and many would suggest, a much simpler missionary field. Comparatively few Canadian youth have known real hunger and want, and have enjoyed arguably the best state-run social services and healthcare (not to mention generously endowed public education) for most of their lives. Ironically, it is this very lack of suffering, this lack of struggle, which has made North America perhaps the most difficult Orthodox mission field, apart from Western Europe.

The ascetical Christian spirit that calls each person to self-sacrifice, to defeating the slavery to the passions of acquisitiveness, lust, gluttony, and sloth – these are not appealing items on the Christmas lists of many Canadian youth. Reared on a diet of multi-channel options, carefully filled social calendars, and schools that often affirm the very passions the Christian faith seeks to uproot, a majority of Canadian youth are not simply disinterested in Orthodox Christianity: they are, in fact, unable to make their way to it, even if they wanted to do so.

Consider the young people who yearn for a fulfilling relationship with a member of the opposite sex. They are bombarded with sexual imagery in all media, surrounded with the titillating babble of their text-messaging peer group, and bereft of the tools for spiritual struggle (which Orthodox clergy are called to teach them, but either have not done, or could not do because families were too busy with the family business to attend to the spiritual formation of their kids). Even faithful Orthodox Christian young people who have been given the spiritual tools and preserved from much of the muck that passes for popular culture – even these faithful ones struggle mightily. For those without the preparation of struggle and suffering, immersed in sensuality, the struggle is lost before it is begun.

To be sure, a segment of the population under thirty has seen its share of pain, and has experienced genuine suffering and loss. In a suburban setting, this can often only manifest itself in a shadow of the image of real Christian struggle. Punk and goth movements and their parallels over the last forty years (beatniks, batcavers, alternative and industrial music movements) have provided an avenue to authentically offer up the spiritual conditions of their generation. Their forms are practically Orthodox: black clothes, unflattering footwear, silver crucifixes and imagery that confronts the question of death in head-on fashion. Similarly, their lyrics, poetry, and literature, ranging from the anger of the English punk scene of the 1970s through to the gothic Edgar Allan Poe fans of our day, provide a window on hearts which are suffering, and sometimes very broken.

So what is holding back such a group from mass migration to the Orthodox faith? The questions these movements raise are the authentic questions of the human condition: Why is there suffering? Why is there evil? How do I come to terms with death – my own, and the death of those I love? And how do I achieve happiness and release from this fallen world, both now and in eternity? These are the questions of the Orthodox faith, and those who truly ask them are rightly cynical about the perky, comfortable answers offered by saccharine western-style Christianity. So again, why are they slow to come?

Perhaps the answer lies within the same artificial suburbs these young people (and not so young, too) hope to escape. As Kirievsky, a 20th century Russian Orthodox philosopher, once said, a man is his faith. And what faith might that be in the comfortable suburbs? It is a faith that fundamentally trusts in material means for its own salvation. Consumerism, with its ever-pressing drive to work, forms the essential structure for our weeks, days, and months. It offers a multitude of options to the individual – rebellious fashion, conformist fashion, recreational fashion – but always remains drowning in the quest for things that pass away, and cannot possibly satisfy the human heart. And for the individual who tires of all this, ever-present entertainment provides a panacea to take away all pain, or at least all consciousness, for a moment.

The goth girl or punk boy who struggles to find the answers to the yearning of their own hearts must overcome the greatest barrier of our times: the barrier of fashion, to which we are all enslaved from our fallen nature. The path out of such enslavement – whether among the ancient martyrs, the refugees of Communism, or in suburban Canada – can never be through passing fashion itself.

The punks, the goths, and all the “alternative” movements have been granted the softness of heart to see the real and burning questions of the human condition. To find the answers, and to live them, requires a rejection of that fashion which the vast majority are unwilling, or even unable, to give, but for the grace of God, and by the prayers of the faithful. As comfortable middle-class Orthodox parishes collapse under the weight of their own spiritual emptiness, perhaps this is the place they can find their resurrection: not in better youth events or Bible studies, and certainly not in cheery pig roasts and dance recitals, but rather in purposefully serving prayers and akathists to saints like Saints Basil of Ostrog, John Maximovich, and the martyrs of the Communist Yoke. Spiritually useful parishes would offer teaching and the sale (or gift) of written lives of the desert saints, who struggled successfully with the same sins. This is a beginning, but it is an important step in connecting those who ask the essential questions of human existence (the punks, goths, and alternative scenes), to those who provide the authentic, tested answers (the saints of the Church).

In light of the struggle of the lost generations to wear their mourning colours for their own sins, and not as slaves of yet another fashion, we might even ask the prayers of saints who came to know the incompleteness of their own spiritual struggles only late in the game, like Saint Niketas, the Goth*. For it is only by the prayers of these holy ones that they – and we – shall find our way out of the vacuum of fashion.

*Saint Niketas the Goth was converted from paganism to Arianism in the fourth century, and served in good faith as an Arian priest. The Arian Goths considered him a saint, for his holiness of life, and he died an Arian. When the Goths were later converted to Orthodox Christianity, his name remained on the calendar of feasts. His incorrupt hand can be found at Decani Monastery, in Kosovo, Serbia.

This article originally appears in A Journal of Orthodox Christianity  Vol. 2 No. 1 – Pascha 2007