What is the difference between the actions of Peter and Judas? Why did Judas Iscariot, a former Apostle, become a symbol of the ultimate fall from grace, while St. Peter not only dwells in God's love but is also acknowledged as the chief Apostle?
Archpriest Alexander Avduguin | 31 March 2010

Passion Week is unique not only for the strictness and length of its fasting and its practically uninterrupted Divine services. These are days in which to empathize with all the vicissitudes of the Gospel story. We enter Jerusalem along with Christ, we hear His last parables, which reveal the meaning of His Incarnation. Being present at the Last Supper, we watch unfold Judas Iscariot’s detestable decision to betray his Teacher. It might have seemed that the former disciple’s denial, foretold by the Savior, had already revealed the depth of this man’s fall, in whose heart sin has taken up its abode. However, that which happened on that Holy Friday night causes us confusion even today…

The denial of Peter – Him to whom was given the title of the “rock” by Christ – the first who confessed Jesus as God; upon whose faith Jesus promised to built His Church, against which the gates of hell would not prevail – we see him weak in spirit, we see him lying. In our hearts we refuse to compare Peter’s denial with the betrayal of Judas; we unwillingly seek a justification for the Apostle, but the rational mind hammers our minds with doubt: have fall, denial, and betrayal really become an integral part of our earthly life? Is it really true that only darkness reigns in our souls and all our aspiration for God, love, and salvation are delusive and vain? 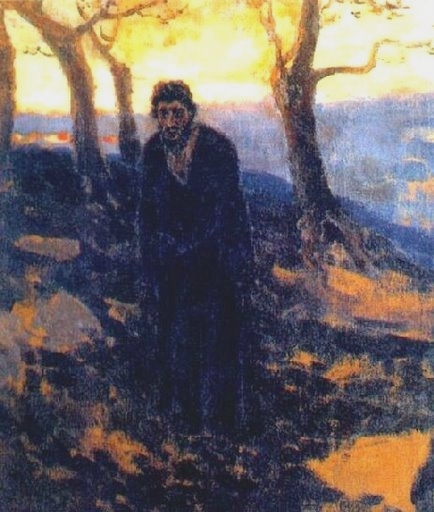 Several years ago, I had occasion to serve on Holy Thursday with our Vladyka. The sermon was given by a young priest who had recently finished the Academy. Several times, relating the events of the Gospel account of Passion Week, he mentioned “the betrayal of the Apostle Peter.” I had never seen our Vladyka so angry. Here he firmly struck the floor of the altar with his bishop’s staff, and he exclaimed formidably: “Peter did not betray! He is not Judas!”

What is the difference between the actions of Peter and Judas? Why did Judas Iscariot, a former Apostle, become a symbol of the ultimate fall from grace, while St. Peter not only dwells in God’s love but is also acknowledged as the chief Apostle?

Let us look at these Gospel events retrospectively and evaluate them not from the point of view of logic and unbiased meaning, but rather with an understanding of human depravity and infirmity. Most importantly, let us turn our attention to the consequences of Peter’s fault and Judas’ betrayal.

Several points help in interpreting the actions of St. Peter and Judas. Both of them, Peter and Judas, had been chosen by Christ, were close to Him, were marked by His love, honored by His gifts, taught by Him the mysteries of the Kingdom of Heaven, called to witness to His miracles, and confessed Him as the Messiah, Christ, the Son of the living God. “The mouth of the disciples” was the name given by St. John Chrysostom to the Apostle Peter, who pronounced this confession, and answered the Lord’s questioning not only on behalf of himself, but also on behalf of all the apostles. After the calming of the tempest, all the disciples professed Him to be the Son of God saying, “Of a truth, Thou art the Son of God” (Mt. 14:33). Both of them sustained the prince of darkness’ temptations while following Christ.

This unites the Apostle Peter with the former Apostle Judas, but it is also what differentiates them.  The Apostle Peter struggles with temptations, sincerely repenting of his human shortcomings and doubts, while Judas Iscariot allows sin to settle in his heart. He begins his collaboration with the Devil.

What led to Judas’s betrayal was moral malice: greed. Let us recall the Gospel event in which Mary anointed Jesus’ feet with precious ointment. This upset Judas: “Why was not this ointment sold for three hundred pence, and given to the poor?” This he said, not that he cared for the poor; but because he was a thief.

From here there is the evolution in sin from theft to betrayal. It could not have been otherwise because unacknowledged sin tends to multiply. Everyone can provide examples in which little transgressions lead to big sins.

Judas’ greed surpassed all the apostolic gifts given him by Christ. In his homily “On Judas’ betrayal,”  St. John Chrysostom says: “Look how much Christ did to persuade him to take His side and to save him: He taught him wisdom, and by His acts and words He put him above the demons [i.e., He gave the twelve disciples power over unclean spirits (Mt. 10:1)]. He made him capable of accomplishing many miracles, to intimidate Gehenna; he was admonished by promises of the Kingdom, he was constantly revealed the mysteries of His thoughts, however not exposing them to everybody. He washed his feet along with the other disciples’ feet, made him a participant of His meals, and did not miss anything, neither big nor small – but Judas voluntarily remained incorrigible.”

One other substantial detail distinguishes Judas from Peter. Judas, being always beside Christ, remained impure of heart. Greed necessarily leads to lies, to the lack of symphony between word, deed, and thought. Therefore it is not surprising that when the high priests began to seek how they might kill him, “Then entered Satan into Judas surnamed Iscariot, being of the number of the twelve. And he went his way, and communed with the chief priests and captains, how he might betray him unto them. And they were glad, and covenanted to give him money” (Lk. 22:2-5). Thirty pieces of silver has become the ultimate step in Judas’ fall and, at the same time, the specific feature of the former Apostle’s nature.

To seek justification for the betrayal of Judas Iscariot is the word “repented” from chapter 27 of the Gospel according to Matthew – “Then Judas, which had betrayed Him, when he saw that he was condemned, repented himself, and brought again the thirty pieces of silver to the chief priests and elders” – is misguided. This is not the repentance of the Apostle Peter, when Peter lamented and pronounced a curse upon himself for his weakness of character, and goes to the Apostles. It is the realization that the traitor has been left completely alone. He is neglected by everybody. He is scorned by everyone. He does not have anything or anybody to believe in and, essentially, he does not have anywhere to go. Indirect confirmation of this conclusion can be seen in the reasons for suicide today. It is solitude and disappointment with the absence of faith. Judas killed God in his heart, became disappointed in his actions, and was left in complete isolation.

Practically all the Church Fathers are unanimous in regarding Judas as a traitor. Although the Blessed Theophylact says, in his commentaries on the Gospels, that although Judas, having received silver for his betrayal, was hoping that his Teacher would miraculously escape from His enemies, he does not lessen the magnitude of his betrayal. Moreover, the betrayal had been committed sacrilegiously and ruthlessly. The kiss, the symbol of love, was used by Judas for a villainous purpose. In the heart of the former Apostle there was no room left for God, which is why before the betrayal Jesus said: “one of you is a devil ” (Jn. 6:70).

The Apostle Peter’s fall may be perceived in a completely different way.

Peter’s denial appears essentially in each human being, in each one of us.  It is the sin of human infirmity and weakness, one revealed in unexpected and tense situations. This is not to be compared with betrayal for “something.” Judas was lead by freedom of choice, while the Apostle Peter expresses just his weakness of character, his human imperfection.  This is the principle difference. The sins are similar, but they lead to opposite results.

More importantly, the Apostle Peter’s fault was necessary. The Lord allowed it, so that the future chief Apostle, as Peter would become, would understand all the depths of human imperfection and by experience learn the damage of human nature.

Even without these explanations, we inwardly understand that the Apostle Peter did not want to, or even think about, denying Christ.  His “betrayal” only displayed the sinful weakness of human nature, about which the Lord speaks so frequently and repeatedly. As one priest on the Internet writes: “Peter spontaneously denied (Christ) due to human fear.” This is an entirely true definition.

Most likely, each of us has heard frequently repeated in sermons and talks by our priests the declaration that we betray Christ by our sins. This is indeed true, but this betrayal is not the same as the denial of Judas, who “betrayed Christ and, when he saw the result of his action, lost all hope; it seemed to him that God could not forgive him, that Christ would turn away from him, just as he had turned away from His Savior; and he left…”  (Metropolitan Anthony of Sourozh).

The Apostle never allowed himself the thought that God had left him, that Christ would not forgive. For this reason, he is considered as the rock of faith, and Judas, who forsook God, has become a symbol of sordid treason.