Maronite Patriarch Cardinal Bechara Boutros al-Rahi last month ended a four-day visit to Moscow on the invitation of Patriarch of Moscow and All Russia Kirill I.

The meeting is significant and constitutes an advanced step taken by Rahi to bring closer Eastern churches of various doctrines. This approach is supported by the Kremlin and the Vatican, which seek to protect the Christian minorities in the East, whose survival is being challenged by the dominance of Islamic forces over the Arab Spring movements. 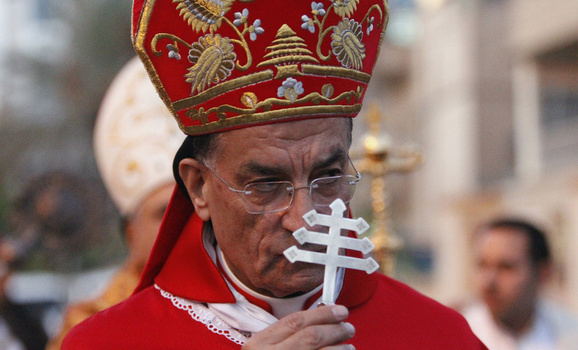 Lebanon’s Maronite Patriarch Beshara Rahi attends a memorial ceremony for victims killed in a militant attack on the Our Lady of Salvation Church in 2010, at the Church in Baghdad, Oct. 31, 2011. (photo by REUTERS/Saad Shalash)

An Eastern church source revealed to Al-Monitor that Rahi and Kirill I discussed in their meeting in Moscow several topics related to fortifying the Christian presence in the Middle East, and joint steps to be taken to preserve this presence. They also discussed ways to strengthen relations between the Russian Orthodox Church and the Eastern Maronite Church. According to the same source, Rahi also met with the speaker of the Russian State Duma, Sergey Naryshkin, in Moscow, where they discussed political issues related to the ongoing church deliberations over consolidatory efforts to protect the Christian presence in the East.

Within the collaborative plan between Moscow — at the religious (Orthodox) and political levels — and the Vatican — the head of the Western Catholic Church — to protect the Christian presence in the East, the Maronite Patriarchal edifice in Lebanon represents a strategic fulcrum in this regard. Lebanon is a rallying point for the Christian role in the region. According to an Orthodox church source, the story of the church’s historical, cultural and democratic distinction may be the same for Christians in and outside of the entire Arab World.

The source added: “Lebanon’s Christians significantly contributed to the revival of Arab enlightenment in the early 20th century. Today, there is a bet on their role in restoring the Christian presence in the East, which is threatened by a dominance of radical fundamentalist movements on the Arab Spring movements.”

In relation to the bet of the heads of the Eastern and Western churches in the world on the important role that Lebanon can play culturally and politically to defend the diversity of the cultural structure of in the region, especially in the Levant, we recall the statement of former Chancellor and Foreign Minister of Austria Klemens von Metternich in the early 19th Century, in which he described Lebanon — which was still Lesser Lebanon (before the four districts were appended to Mount Lebanon) — as “the laboratory of the East” and “a country with a small area, but big role.”

In April, a group of Lebanese Orthodox bodies, which have connections with the Church of Moscow and the Russian Embassy in Beirut, intend to organize a conference for the Christian minorities in the East in the Lebanese capital, Beirut. The conference is exclusively limited to Christian minorities. Efforts to hold the conference are spearheaded by Moscow, which seeks to convey a Christian message that the Christians of the East feel threatened and seek to unify in order to confront this threat.

The conference is part of more comprehensive events currently taking place in Lebanon in this regard to draw attention to the Christian presence in the East by describing it as threatened cultural entity.

According to a source close to Rahi, the latter initiated an effort to create rapprochement between the Levantine Eastern and Western churches. His recent visit to Syria to participate in the inauguration of Patriarch John Yazigi of the Greek Orthodox Church of Antioch was perhaps the most significant practical step he took to reinforce this approach. No head of a Western Church in the Levant has ever participated in a ceremony to install the head of the Eastern church.

Furthermore, no Patriarch of Bkerké has visited Syria since 1925, since the Lebanese Maronites who have a Western culture and orientation had maintained a cautious political distance from the Baathist regime in Syria. Rahi did not only break this caution, but mentioned in his speech at the Orthodox Church in Bab Touma, the largest Christian neighborhood in Damascus, a political opinion on how to resolve the crisis in Syria that goes against the firm view of the states that are friends of the Syrian people.

Through Rahi in Syria, the Vatican declared its rejection of the continuing violence there, even under the pretext of reform. Rahi said: “All reforms are not worth a drop of blood of one Syrian citizen.”

Over the past two decades, during the mandate of former Patriarch Nasrallah Boutros Sfeir, Bkerké had adopted a biased stance in favor of Lebanese political forces opposed to the Syrian regime. Based on Sfeir’s positioning, the tradition of the Bkerké patriarchs’ refusal to visit Syria continued.

Today, Bkerké under Rahi, with the support of the Vatican, has turned its back on the policy of hostility to the Syrian regime, and adopts the notion that its radical Islamist alternative that currently dominates the popular movements is an extreme evil that threatens the future of the Christian presence in the entire East.

Theoretically — according to a Lebanese church source — the Eastern Christians can contain the crisis of presence they are currently experiencing in Iraq (less than a quarter of Christians remain in Iraq 10 years after the US invasion), in addition to their existential crisis in Egypt (the number of Copts who have left Egypt since the revolution is 100,000). However, the Christians cannot afford a crisis of presence in Syria. If Palestine is the birthplace of Jesus Christ, Syria is the birthplace of Christianity. If this presence is struck in its cradle, it will lead to a structural blow to the history of Christian presence in the East, which cannot be compensated.

Last year, the former Pope came to Lebanon, ignoring warnings that his visit might be life-threatening. His visit embodied a church saying that “the shepherd should be present among his flock in times of calamity.” The pope prayed for peace in Syria. He appealed to Eastern Christians, who are facing a difficult test of steadfastness on their land, not to immigrate.

However, violence continued at a greater pace after his visit, and resulted in further emigration by Syrian Christians. His appeal for peace and the non-displacement of Christians was not respected by the Islamist opposition. The pope seems to be in a position in which Joseph Stalin’s famous question applies: “The pope? How many divisions does he have?”

What is happening in the Lebanese town of al-Qaa near the Syrian border is a sample of a reality in which there is a continuation of sharp sectarian discrimination destructive to the Christian presence in Syria. Hundreds of displaced Syrian families from the Homs countryside continue to flock to this town of Sunni Muslim and Christian citizens. Among them are around 100 Christian families who have stayed in the Christian quarter of the town, and the displaced Muslims in the Muslim neighborhoods.