Source: DECR
Natalya Mihailova | 22 August 2014
On 19 August 2014, the feast day of the Transfiguration of our Lord and Saviour Jesus Christ, Metropolitan Hilarion of Volokolamsk, chairman of the Moscow Patriarchate’s Department for External Church Relations, officiated at the Divine Liturgy at the Cathedral of the Transfiguration in the Novospassky Stavropegic Monastery in Moscow. 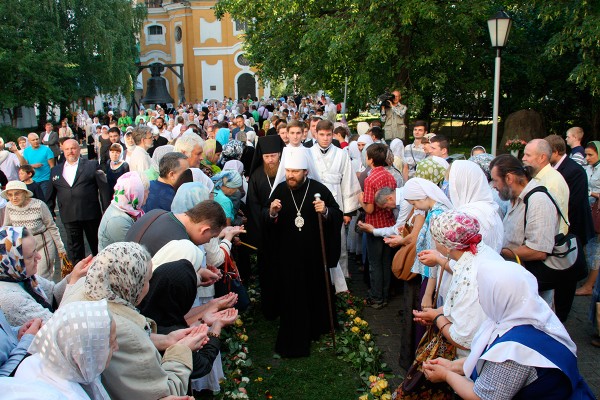 Concelebrating with him were Bishop Savva of Voskresensk, abbot of the monastery, as well as the Moscow clerics and ordained brethren of the Novospassky abode. During the Liturgy, a prayer for peace in Ukraine was said. After the service, Metropolitan Hilarion blessed a graveside cross at the burial place of Archbishop Alexy (Frolov) of Kostroma and Galich who had been an abbot of the Novospassky Stavropegic Monastery in 1991-2011. After the procession with the cross and the traditional blessing of fruits of the new harvest, the DECR chairman addressed all those present with a homily, saying in particular:

“Your Grace, dear Vladyka Savva, dear fathers, brothers, and sisters! First of all, I would like to convey to you a blessing from His Holiness Patriarch Kirill of Moscow and All Russia who is now in the Solovetsky Monastery of the Holy Transfiguration and is celebrating the Divine Liturgy in commemoration of this great feast. Perhaps, it is not fortuitous that many monasteries of the Holy Rus’ were dedicated to the feast of the Holy Transfiguration. Our Lord Jesus Christ was transfigured before his disciples on Mount Tabor, and the Church, together with her people, has been living the experience of the Transfiguration. We know that in our human life light coexists with darkness and evil coexists with good. Many of the abodes which had been built for centuries by our ancestors to transfigure the souls of people, both their inhabitants and pilgrims, in modern times were turned into places of torture and murder, where evil seemed to triumph over good and darkness seemed to triumph over light. For instance, the holy Solovetsky abode became a place of mass executions, repressions and tortures. People were executed by shooting within the walls of this monastery as well. It is only these days that we have seen the holy abodes beginning to revive. For the recent twenty-five years, the majority of the monasteries of the Holy Rus’ have revived thanks to the work of monks, nuns, benefactors, and all those who were concerned about the future of those monasteries. Today, in the abode which was restored thanks to the work of the late Patriarch Alexy and the late Archbishop Alexy of Kostroma and Galich, who had been the abbot of the Novosspasky Monastery, we have blessed the cross in commemoration of a man who had worked so hard to restore the abode in its former splendour and glory. Now here monks are serving, laypeople and clergymen are studying, and church life is flourishing. I am glad that so many people have gathered here on this church feast day in order to glorify the Lord transfigured on Mount Tabor.”