The fifth anniversary of Metropolitan Hilarion’s appointment as DECR chairman 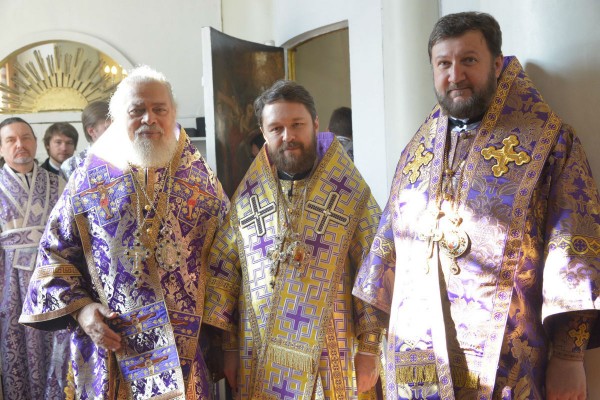 On 30 March 2014, the fourth Sunday in Lent (St. John of the Ladder and commemoration day of St. Alexis the Man of God), Metropolitan Hilarion of Volokolamsk, chairman of the Moscow Patriarchate’s Department for External Church Relations (DECR), celebrated the Divine Liturgy of St. Basil the Great at the Moscow church of the ‘Joy to All the Afflicted” icon of the Mother of God.

Archbishop Ivan Jurković, Apostolic Nuncio to the Russian Federation, attended the service. After the Liturgy, Archbishop Nifon congratulated Metropolitan Hilarion with the fifth anniversary of his work as Chairman of the DECR on behalf of the representatives of the Local Orthodox Churches and said: ‘A new page in the history of the Department established in 1946 has opened with your appointment.’

Archbishop Nifon mentioned Metropolitan Hilarion’s contribution to the consolidation of relations among the Orthodox Churches and the development of inter-Christian relations and also his contacts with diplomats of many countries. He also mentioned Metropolitan Hilarion’s visit to Lebanon in 2013 and said that people would never forget it as Metropolitan’s words penetrated their souls. In his archpastoral homily Metropolitan Hilarion reminded the worshippers of the DECR’s history and spoke at length about the duties and responsibilities of the Department and its recent activities, including the Synaxis of the Primates in Istanbul. He dwelt on the situation in the Middle East and in the Serbian Orthodox Church, on the dialogue with the Roman Catholic Church.

In conclusion, Metropolitan Hilarion thanked all the worshippers for their prayers and support.

Archbishop Ezras (Nersisian), head of the Novo-Nakhichevan and Russian diocese of the Armenian Apostolic Church, congratulated Metropolitan Hilarion at the repast after the service.