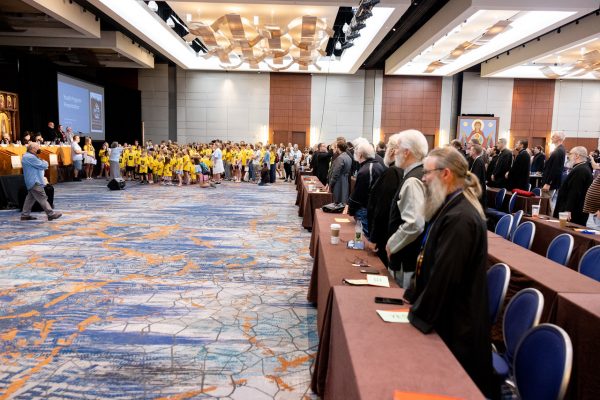 The 20th All-American Council of the Orthodox Church in America concluded on Friday with the fifth Plenary Session. The morning began with a performance by the youth. After preparing throughout the week with the youth program leaders, they sang liturgical hymns in two-part harmony for the delegation. The youth program for the All-American Council brought together 103 children from across the Orthodox Church in America for five days of education and activities.

In lieu of the report on military and veteran chaplaincy, Archpriest Peter Dubinin and Priest James Parnell offered presentations on the work of chaplains and the need for more candidates to pursue this path. Archpriest Steven Voytovich then outlined the work of institutional chaplains in his report. He emphasized that this vocation is not limited to ordained clergy, but can also be a career opportunity for lay men and women.

His Beatitude Metropolitan Tikhon offered his closing remarks, connecting today’s feast of Saint Mary Magdalene with the theme of the Council, “Becoming Vessels of Grace.” Just as Saint Mary proclaimed her experience of the Resurrection to others, he remarked all the members of the delegation should take what they have experienced over the past week and “offer it to God’s people.

The 20th All American Council closed with the installation of the new members for the Metropolitan Council and the Pension Board, led by His Beatitude.

Minutes and photos will be forthcoming.

Video Overview of the Day