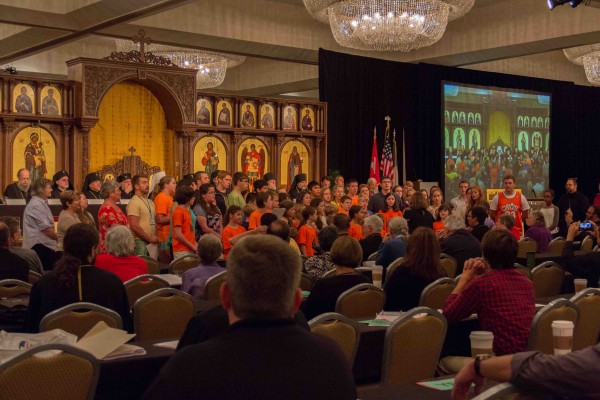 “We, the youth of the 18th All-American Council of the Orthodox Church in America, have a vision for our Church,” said the older youth participants in a statement to delegates and observers.  “We dream of a Church that

“This is our vision,” their well-received statement concluded.  “We challenge you to help us make it a reality!”

A recommendation to establish an OCA youth program, similar to GOYA and SOYO, also was presented by the youth.

Echoing the sentiments expressed by their older peers, the fifth graders spoke of the saints they had studied during the week who “helped expand the Mission of the Church by spreading the Word of God through the building of churches and monasteries; translating the Scriptures and divine services into other languages; living a Christian life, sometimes risking their own lives by doing so; helping others by providing food, shelter, clothing and medical care to those in need; and always relying on God and humbly putting the needs of others before themselves.”

The AAC’s very youngest participants delighted delegates and observers with their presentation of “the road to sainthood” before they sang the troparion to Saint Innocent and “Beneath your compassion.”

The youth and children presented His Beatitude, Metropolitan Tikhon with a backpack of craft supplies and a cross they had decorated with their thumbprints and signatures.  He thanked the children and encouraged them “to live a good life as Christians with their families,” to “bring [their] parents to church,” and to “never get discouraged.”

In conjunction with the presentation on the Diocese of the West, His Eminence, Archbishop Benjamin, noted that the ethnic makeup of the diocese is a reflection of America in general.  He then introduced Archpriest David Lowell, who described how the diocese had initiated a program to help fund parish capital improvement programs—a model for the entire OCA and the whole of Orthodox Christianity in America.  The Archdiocese of Pittsburgh and Western Pennsylvania’s video presentation traced the Archdiocese’s lengthy history and showcased some of its current outreach ministries.

With regard to the Resolution on Spiritual Abuse brought up at the fourth Plenary Session, it was noted that this serious issue, related to the spiritual health of the clergy, will be taken up by members of the Holy Synod of Bishops.

Newly elected representatives to the Metropolitan Council and Pension Board were installed during the session’s closing prayers.

After the closing prayer, delegates, participants and youth began their journeys home, renewed and refreshed in the Spirit and ready to “put into action” all that they had prayerfully heard, seen, witnessed and learned during their AAC experience.  As one senior archpriest commented as he ran to catch the airport shuttle, “on a scale of one to ten, this Council was a fifteen!”