Source: DECR
Natalya Mihailova | 10 November 2015
Film of Metropolitan Hilarion of Volokolamsk, ‘A Pastor’s Way’, about life path of His Holiness Patriarch Kirill of Moscow and All Russia was presented at the 60th International Belgrade Book Fair held in Belgrade on October 25-November 1. 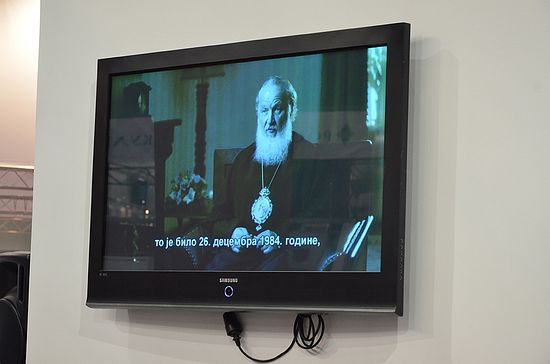 The film was translated in the Serbian language and shown at the central stand, ‘Books from Russia,’ at the meeting held on the publications and information programmes of the Russian Orthodox Church.

During the Book Fair, the Russian Hall hosted meetings and presentations of publications, for instance, of a set of scholarly works written for the millennium of the demise of St. Vladimir Equal-to-the-Apostles, the Baptizer of Russia, and new books by Russian authors.

Documentaries about the life of the Russian Orthodox Church were shown at the Russian Hall every day.

People who saw the film about His Holiness Patriarch Kirill warmly welcomed it and expressed their wish for the Serbian audience to see more films like this.