Not the First and not the Last

Source: Orthodox England events' blog
A French resistance-fighter, in combat for the liberation of the Ukraine from the Nazi/Uniat globalist junta in Kiev, has joined the Church in the free Ukraine.
Natalya Mihailova | 28 October 2014 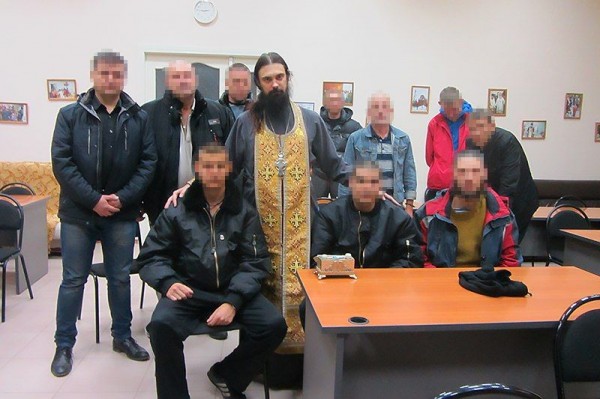 Since the 1960s, and even before that, spiritually sensitive Western people have been drawn to embrace Russian Orthodoxy, realizing the historic and far-reaching errors of the Western world and that their only salvation is in Holy Rus. This movement of repentance for millennial apostasy continues today. As we reported on 10 October, a French resistance-fighter, in combat for the liberation of the Ukraine from the Nazi/Uniat globalist junta in Kiev, has joined the Church in the free Ukraine. He was soon followed by another Frenchman and now, most recently, by two Catalans. Here follows a translation of excerpts, under the original title, from an interview between themselves and the priest who received them.

What drove you to come here and fight in this war?

How could we stand aside? We saw on TV how they are bombing towns, peaceful civilians, shooting people and burning completely innocent people to death, raping little girls, cutting people up and selling off their organs, the mass burials and the destruction of churches. These are monstrous, unheard of crimes against mankind! We cannot understand it, in Spain the army protects the people, but here the Ukrainian army is killing its own people. How can this be happening in the 21st century? Clearly demonic powers have been unleashed in Novorossiya (eastern and southern Ukraine)….Your pain is our pain, our tears, and your victory over the Fascists is our victory. That is why we are here, God has called us here. We are not the first and not the last.

Spain is not next door, how did you get here?

We are Catalan nationalists. Just for coming here to fight we would get long prison sentences in Spain…We had to overcome many difficulties to get here….

After the crisis life has not been easy in Spain. There is high unemployment, especially among the young. Joining the EU did not improve our lives, prices rose, life did not get any better with debt, we suffer economic slavery. Spain is rotting from corruption, democracy is just a word, the country is controlled by clans of oligarchs. We have been fighting for the freedom of Catalonia for a long time. Evil values are being foisted on us, even though the overwhelming majority of the population is against…

When did you last go to a Catholic church? What is your attitude to faith? Did you know anything about the Orthodox Church at home?

There is no Orthodox church in our town and we knew nothing about it until we met you. We cannot remember when we last went to a Catholic church…

Do you like our church? What did you feel at the service?

The church felt like a home for our souls, everything is unusual, beyond our understanding, but close to our souls. To be honest, when we were at a Catholic service, we sat down but after half an hour we felt weighed down, but here, standing up, after two and a half hours, understanding nothing, we felt as though it had all lasted only 20 minutes.

Most viewed articles
Saint John Chrysostom and Family Life141
Our Unity in Christ80
Metropolitan Hilarion: Christians in the Middle East and Other Countries Need Both Our Support and Prayer66
Patriarch Theophilos III of Jerusalem: Our Common Commitment is to Gather for Prayer and Fellowship54
Healing the Inner Pharisee23
P.Kirill1
Most popular authors
Archimandrite Ephraim of Vatopedi141
Pravmir.com team120
Abbot Tryphon80
Archpriest Stephen Freeman23