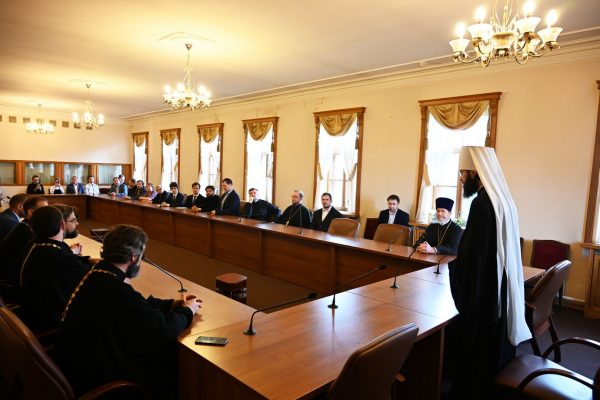 On the 17th of June 2022 a meeting took place in the Great Hall of the Department for External Church Relations of the Moscow Patriarchate between the newly-appointed chairman and his colleagues.

Metropolitan Anthony of Volokolamsk said to those present:

“With regard to the recent decision by His Holiness Patriarch Kirill and the Holy Synod which concerned the Department for External Church Relations, I thought it important during these first few days in my position as chairman of the Department that we should meet and that I should take this opportunity to say a few words to you.

I think I am within my rights to state that I am no stranger to the Department for External Church Relations as almost half of my conscious life has been tied to this building and many of you in one way or another.”

The newly-appointed head of the DECR shared his memories of how he first visited this Synodal institution in 2007 and received the first serious church obedience in his life as a staffer in the Communications Service.

“A short time later I was given the honour of being personal secretary to the chairman of the Department, Metropolitan Kirill of Smolensk and Kaliningrad,” said metropolitan Anthony. “This event (looking back, I can say so with complete assurance) marked out the entirety of my life and my service to Christ’s Church. On the one hand, being in the reception office of the chairman, working alongside Metropolitan Kirill, now His Holiness Patriarch, I experienced a unique and most valuable school of church life which shaped me as a priest and as a bishop. On the other hand, at the same time I became well acquainted with how the administrative system of the Russian Orthodox Church works, and in particular how the Department for External Church Relations functions, what structures make it up and, what is especially important, I got to know those who worked at the Department, that is, many of you, dear fathers, brothers and sisters.

When in 2009 Metropolitan Kirill was elected to the Patriarchal Throne, I transferred with him to another building, that of the Moscow Patriarchy on Chisty Lane, but nonetheless my connections with the Department continued as we were in constant contact, mutually interacted and together prepared the Patriarch’s meetings, his trips and documentations for events he participated in.

When I was appointed to serve in Italy, my ties with the Department continued as I was involved in the relationship between the Russian Orthodox Church and the Roman Catholic Church. As I served abroad, I made use of the help and support of many Department workers, who gave me invaluable advice and helped me out in whatever new line of work came my way.

And for almost seven years, when I worked on the ground floor of this building in the Directorate for Overseas Institutions, we would not only meet and talk in the corridors but of course closely collaborated, for it is impossible to separate the life of our overseas parishes, representation churches, representation offices, dioceses and exarchates from the external activities of the Russian Orthodox Church.”

In speaking of his future work in his position as head of the Department for External Church Relations, Metropolitan Anthony noted that the goals and tasks which the DECR faces have not changed since the time when the Synodal institution was founded: “Everything that the Department has worked for – the strengthening of ties between the Local Orthodox Churches, the pursuit of dialogue with the other Christian denominations and representatives of other religions, interaction with the authorities and public organizations (both within Russia and abroad where the Russian Orthodox Church is represented), aid to our compatriots who are dispersed throughout the world – all of this, of course, will remain our prime concern.”

At the same time, the Church today is accomplishing her mission under very difficult circumstances which have had a vital impact on the work of the DECR, continued Metropolitan Anthony.

“Especially alarming today is the situation in the sphere of inter-Orthodox relations. Church unity is under serious threat, a new type of doing things in the Church is being imposed upon us by destroying the former order by which the Church lived for centuries, a new type of Orthodoxy ecclesiology which is alien to us is being imposed upon us … Today we are living under very difficult geopolitical conditions which, although they may not concern us directly, they will concern us in some way or another as the Church is an integral part of society,” Metropolitan Anthony emphasized.

In spite of all these complications, he encouraged the workers of the DECR to look towards the future with optimism: “We know that the Lord created His Church and that ‘the gates of hell shall not prevail against it’ [Matthew 16:18]. Over the thousands years of her existence, the Church has accumulated colossal experience and has always dealt with those dangers that have come from both outside and from within.”

“The Department for External Church Relations finds itself at the cutting edge of this struggle and defends the interests of the Russian Orthodox Church and canonical order, and as such the fact that you here all are fathers, brothers and sisters is the pledge of a successful resolution of the difficulties that beset us,” said the head of the DECR, noting the importance of the professionalism of the workers of the DECR and their dedication to their service.

“I am fully aware of what a difficult obedience His Holiness Patriarch Kirill and the members of the Holy Synod have laid upon me. In my future labours, in as far as the Lord will bless me, I will place my hope in God’s aid and your help,” Metropolitan Anthony said. “Many of you have worked here for many years and have accumulated a unique, invaluable experience which I would like to soak up like a sponge, especially in the early stages of my service in this position. I will have need of your advice. For my part, of course, I will do everything within my power to be informed as quickly as possible so that my time here in this position will be of benefit for the Church of Christ and that it will justify the expectations which the hierarchy have laid upon me.”

At the end of his speech the newly-appointed chairman wished his colleagues God’s aid in their labours.

Then, on behalf of the workers of the Department, the deputy chairman of the DECR, Father Nikolay Balashov, greeted Metropolitan Anthony.

“I would like to express my desire that your time as chairman is a blessed one. It is called to continue and increase the glory and honour of our oldest Synodal institution, as you rightly noted, headed by intelligent, interested, outstanding people, each of whom has left an enormous impact in the history of our holy Church. May the prayers of Saint Mark of Ephesus, the venerable and right-believing prince Daniel of Moscow, all the saints of the land of Russia, as well as of all your predecessors and your colleagues may be a help to you, for they shall all be praying for the success of the cause which has been entrusted to the Department for External Church Relations, which is to say, the protection of the rights and interests of our Church, her dignity and the chance for her to carry out unhindered her mission of saving the human race, as commanded to our Church by the Lord Jesus Christ,” Father Nikolay said, in particular.