Source: Asbarez Armenian News
Natalya Mihailova | 13 May 2014
NICOSIA, Cyprus—Divine Liturgy was carried out for the first time in 50 years in the Armenian Church of Virgin Mary in the Turkish-occupied northern part of the Cypriot capital of Nicosia on Sunday, Gibrahayer Magazine reports. 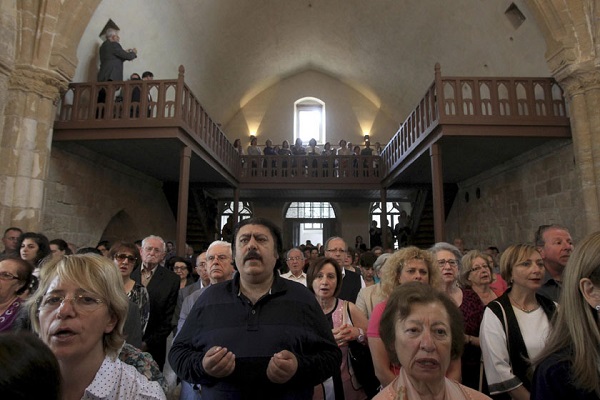 The Liturgy was carried out by the Armenian Archbishop Varoujan Hergelia, who re-consecrated the church as it had not been used for such a long time. The event was addressed by Armenian-Cypriot Member of Parliament Vartkes Mahdessian, who spoke at the church’s first ceremony in more than half a century.

The Church lies in the northern part of Nicosia, which is occupied by the Turkish government along with the rest of northern Cyprus, but recognized as Cypriot territory by the international community. The Church provided shelter for thousands who fled the Armenians Genocide between 1915 and 1923.

The church complex, which was in a very bad condition, was restored between 2008 and 2013 with the held of UNDP-ACT and USAID funding following the initiative of the American Ambassador John Koenig.

Also present at the liturgy were state officials, representatives of other religious communities of the island and members of foreign diplomatic missions in Cyprus as well as a large number of Armenian Cypriots who came from all over the island and from abroad.

“The church was full. People had to stand outside too,” said Alexander Michael Hadjilyra, Member of Parliament Vartkes Mahdessian’s spokesman.

Upon arrival everyone was given candles and a booklet with the church’s history.

“Everyone kept their candles lit during the liturgy. It was wonderful, I’m so happy,” said Anahid Eskidjian, who sang in the choir on Sunday and is also a member of the Women’s Church Committee. 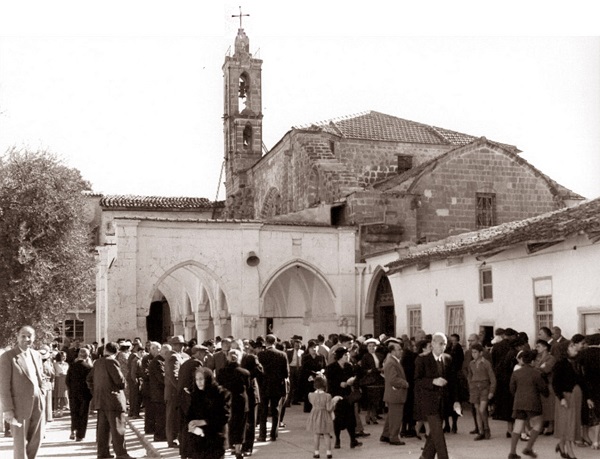 Like many of the congregation, Eskidjian was once a resident of the area which, until it was abandoned during the intercommunal unrest in 1964, had been the main residential quarter of the Armenian community.

To commemorate and celebrate the day, members of the Armenian Church Committee offered everyone attending sweets, incense, olive branches and a photo of the church with the date of the liturgy.

The event gave the opportunity to many former residents of the quarter to visit their homes, meet with old school friends and neighbours and reminisce.

“It was a re-union indeed! After the liturgy, despite the rain, people stood and talked, reminding each other incidents of their childhood. It was a wonderful day,” said Eskidjian whose home was opposite the church.

“Many people had not come back here since 1964, so it was also an opportunity to go see their homes,” said Hadjilyra.

The service has also sparked hope that more will follow.

“We hope that more liturgies will be carried out in the near future and that it is not a one-time thing,” said Hadjilyra.

It was a great opportunity for Armenian Cypriots to travel from abroad as next Sunday the annual pilgrimage to the Armenian Monastery of Saint Magar (Ayios Makarios) in the Pentadaktylos Mountain will take place.

The monastery which is known as Magaravank or Armenomonastiro, sits in Plataniotissa forest and is an 11th century Coptic monastery dedicated to Saint Magar. It came under the Armenian Orthodox Church in 1425 and it was inhabited by monks until 1800. Armenian families lived in the vicinity until the 1920s.

The monastery’s estate which was the Armenian Prelature’s most important source of income was used as a weekend resort by Armenian Cypriot families, and a camping site by scouts and students. The monastery’s site was abandoned in 1974.

The pilgrimage, which is also an important event of the Armenian Cypriot community, was revived in May 2007 on the initiative of House representative Mahdessian under the supervision of the UNFICYP. From 2009 onward it has been taking place at the beginning of May each year.