A mass exodus of Christians, including a group evacuated from the besieged city of Homs, have been fleeing Syrian cities for safety. Caught in the middle of a showdown between opposition forces and the Syrian army, many Christians fear the prospect of an Islamist-led government if President Bashar al-Assad is deposed.

On July 11, Maximos al-Jamal, a Greek Orthodox priest, negotiated a deal between armed rebels and the army to evacuate 63 Christians caught in the crossfire in the bombed-out city of Homs, the Associated Press reports. Al-Jamal feared that as army attacks intensified, rebels were keeping Christians in the city as bargaining chips As al-Jamal told the Associated Press, “Gunmen have told the besieged people that if you go out of these areas, we will die.” 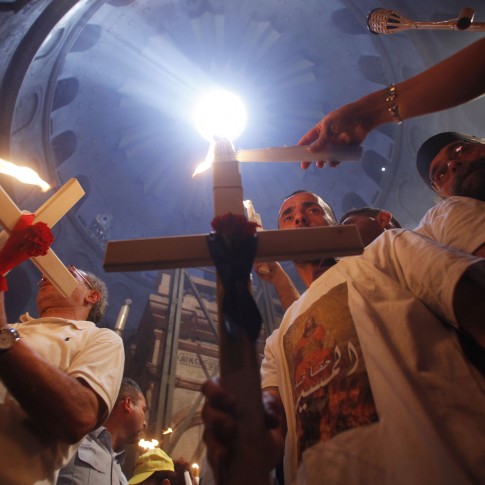 Before Syria’s uprising began early last year, thousands of Christians lived in Homs. Today, however, according to al-Jamal, only 100 Christian civilians remain, a loss that probably contributed more to rebel attacks against Christians than the army’s bombardment of the city.

“The armed [rebels] in Syria [have] murdered more than 200 Christians in the city of Homs, including entire families with young children,” a priest in Homs told Barnabas Aid magazine. “These gangs kidnapped Christians and demanded high ransoms. In two cases, after the ransoms were paid, the men’s bodies were found.”

The evacuation of Christians from Homs is only the latest occurrence in a mass exodus of Christians from Syrian cities. In June, nearly 10,000 Christians fled Qusayr after being given an ultimatum to leave the city by a rebel commander, Barnabas Aid reported. The threat was apparently echoed in the city mosques: “Christians must leave Qusayr within six days, ending Friday (June 8).” Rebels, however, denied the accusations; they claimed that Christians began fleeing months earlier, when the army shelled the city.

Many Syrian Christians, considered loyal to President Assad, are afraid that rebel groups—widely led by Islamists—will persecute non-Muslims and stifle religious freedoms. Historically, Christians have been granted a higher degree of freedom in Syria than in most other Middle Eastern countries. Despite reports of massive violence initiated by the regime, many Syrian Christians still believe that Assad is their final hope for a peaceful existence.

“Christians are increasingly being targeted and driven out of their homes and districts.” Elizabeth Kendal wrote for the Religious Liberty Prayer Bulletin. “Some 138,000 Christians have fled Homs, where Christians have been terrorised and churches have been looted and occupied by rebel forces… In areas under rebel control, intolerant, hard-line Sunni fundamentalism is making Muslim-Christian coexistence impossible. For the jihadists, neutrality is not an option, and Christians (and Muslims) refusing to support the jihad are being tortured, expelled and murdered.”

As in Egypt, Tunisia, and other Arab countries, the uprisings in Syria—which initially called for democratic change and greater freedoms—provided a platform for Islamists, long-suppressed under authoritarian rule, to rally behind a fundamentalist agenda.

“For the newest generation of Sunni jihadists, Syria has become the latest front in the struggle to wrest control of the region from rival religious sects and foreign occupation,” Daniel Brode, Roger Farhat, and Daniel Nisman, intelligence analysts at Max-Security Solutions, wrote in an op-ed for the New York Times. ”Many of these fighters hail from the vast reaches of North Africa and the Gulf, arriving in Syria with weapons, funds and a radical ideology.”

Asia News, quoting Kuwait’s Arabic-language newspaper, Al-Qabas, reported that “jihadists” from Kuwait, Saudi Arabia, Algeria, and Pakistan “crossed the Syrian-Turkish border to fight in the jihad alongside [opposition forces]… against the regime of Bashar el Assad.”

Moreover, Agenzia Fides, the official Vatican news agency, reported that, “armed opposition… is gradually radicalizing towards Sunni extremist ideology.” In another report, Agenzia Fides stated that Syria’s Salafis—who follow the strict Wahhabi doctrine of Islam found in Saudi Arabia—are carrying out “brief executions” against Christian “infidels” while initiating a “sectarian war”. These Christians are given a choice to either join the opposition or face “harassment, discrimination, [and] violence.”

As war continues without resolution, there is grave concern that Syrian Christians will follow the path of other ancient Christian communities throughout the Middle East: In Iraq, after the US-led invasion in 2003, more than half the Christian population—caught between Sunni and Shia sectarianism— fled the country. In Egypt, reports indicate that since March 19, 2011, after the political rise of Islamic parties, including the Muslim Brotherhood, at least 93,000 Christians have sought visas to Western countries. The endangered status of Christians in Arab countries is so severe that Ken Blackwell, a human rights expert and board member of the Becket Fund for Religious Liberty, wrote that “Christians are being ethnically cleansed throughout the Middle East.”

“Look at what happened in Egypt and Iraq,” a Syrian church leader, who asked to remain anonymous told International Christian Concern. “Christians want to peacefully go out and ask for certain changes, but Islamist groups are sneaking in with their goal, which is not to make changes for the betterment of Syria, but to take over the country with their agenda. Christians will be the first to pay if this happens.”

Most viewed articles
COVID Directives From His Eminence Metropolitan JOSEPH165
Our Lenten Journey164
The Wrath of God According to St. John Chrysostom143
Moses and the Ten Words141
New Film about Orthodox Christian Vision on Climate Change120
Serbian Patriarch Porfirije Gives Interview to Serbian National Television115
In Church and at Home: Liturgical Resources for Great Lent87
Bishop Benedict of Bistrița in Relation to Young People: I Want to Be One of Them45
Why We Pray For The Dead1
How We Worship: the Struggle of the American Experience1
Most popular authors
Pravmir.com team235
Priest Luke A. Veronis165
Archbishop Joseph of New York and Metropolitan of All North America165
Archpriest Michael Gillis143
Archpriest Lawrence Farley141
Peter Samore87
Aurelian Iftimiu45