“Food, Sex, and Sports: Idols or Pathways to Salvation?”

Putting words on a page often helps to clarify our thinking.  In writing The Forgotten Faith:  Ancient Insights for Contemporary Believers from Eastern Christianity (Cascade Books, 2013), I attempted to present key Orthodox insights in ways that average Americans could appreciate them, not as exotic or abstract ideas, but as invitations to the abundant life found in Jesus Christ.  To connect with people today, we have to begin where they live, so to speak, which may require making some unusual connections.  So here we go…

Food, sex, and athletics are probably more real to most people in our society than is the Lord.   Contrary to the assumptions of popular culture, true Christianity is not an escape from the world as know it to an invisible and imaginary realm.  Our Orthodox faith does not require us to abandon or condemn any dimension of life, but instead to offer all that we are and do for fulfillment, blessing, and healing.  There is no part of our existence that is intrinsically evil or cut off from the good news of our salvation.  We become more fully who God created us to be through the practices of our Orthodox faith in the world as know it. 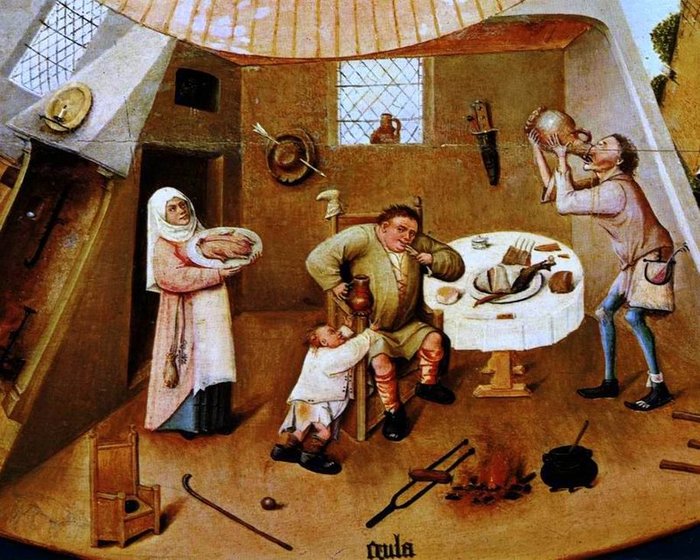 Hieronymus Bosch. A fragment from The Seven Deadly Sins and the Four Last Things

Take eating and drinking, for example.  The biblical story of the corruption of humanity and the entire creation begins with the abuse of food in the Garden of Eden.  There was nothing wrong with the fruit of the vine, but Adam and Eve chose to use it to satisfy their self-centered desires instead of obeying God and growing closer to Him. Jesus Christ set right the place of food by using bread and wine as Communion, as the menu of the Heavenly Banquet.  Almost all of us struggle with passions related to overindulgence in food and drink of one form or another.  The Lord does not save us by condemning what we tend to abuse, but instead by Himself becoming our food and drink.  He fulfills the original role of the fruits of creation in giving life and strengthening our relationship with God and one another.

Orthodox Christians fast, not because there is something wrong with food itself, but because there is something wrong with each of us personally and spiritually.  In other words, we have followed Adam and Eve in using these blessings for something other than their intended purposes and, consequently, have become slaves to our distorted desires.  No wonder that so many people today are obese, have eating disorders, or develop diabetes due to an unhealthy diet.  By learning to discipline our appetites a bit on fast days, we gain some experience in controlling other self-centered desires for pleasure or simply getting our own way.  We can direct the money saved by eating a humble diet to serving Christ in the poor, even as we grow in humility when we find it hard to be content with broccoli and tofu instead of steak and eggs.  It is through the struggle to discipline our desires that we become more fully the people God created human beings to be in the first place.

If fasting is not a sufficiently touchy topic, let’s turn now to sex.  As the lyrics of both country music and rap demonstrate, the temptations in this area of life are powerful even as the consequences of our missteps in it are grave.  Since contemporary American culture has lost all sense of chastity, it is imperative that Orthodox believers—especially our youth—are solidly grounded in traditional Christian teaching and practice about holiness in the relationship between man and woman.  Unfortunately, movies, music, the internet, and other forms of media celebrate corrupt ways of living that lead people very far from the paths to the Kingdom that Jesus Christ blessed and the saints have exemplified.  Though it is terribly unpopular to say today, we must bear witness to the countercultural view that sexual intimacy should occur only within marriage between one man and one woman.  Here two persons become one and, in the normal course of things, bring a new person into the world from their embodied love for one another.  Not simply a matter of morality or biology, we encounter a profound image of the Holy Trinity in the Christian family, for distinctive persons share a common life and love.  Our aim in sexual ethics is higher than enhancing public health or securing consent between the parties involved, for marriage and celibacy are both means of participating in the eternal life that Christ has brought to the world. We should not be surprised that the One who created us as man and woman also directs us how to use our sexuality for our salvation.  To embrace anything less is to distort what it means for human beings to be in the image and likeness of God as male and female.

Despite what the advocates of the sexual revolution maintain, there is nothing new under the sun.  St. Paul dealt with just about every form of human decadence imaginable in Corinth, and Jesus Christ taught a sexual ethic in the Sermon on the Mount that still challenges even the most righteous to grow in purity of heart.  Whether we are married or celibate, we all have more than enough challenge to fight our own passions and keep a close watch on our thoughts and desires.  The self-righteous judgment of anyone else is simply not our concern.  Again contrary to popular opinion, it is possible—and it is imperative for Orthodox believers– to maintain the ancient Christian vision of sexuality and marriage without becoming like the Pharisees.  Both St. Photini (the Samaritan woman at the well in John 4) and St. Mary of Egypt, for example, got off to a bad start in this regard, but ultimately became great saints of the Church.  Thank God, there is hope for us all to become more fully who God intends us to be.

Given the skimpy costumes and suggestive movements of some cheerleaders and dance teams today, there is at least some connection in popular culture between sex and athletics.  Though we rarely think of sports in relation to religion, there are also some similarities between gatherings of fans and of worshippers.  Both congregate as a community to take on a collective identity that they show by what they say and do.  Orthodox stand up, raise their voices, and make distinctive hand gestures (i.e., cross themselves) in a familiar pattern, as do fans of many sports. Where I live in West Texas, high school football fans drive long distances, sit or stand in blazing heat or bitter cold, and then arrive back home in the middle of the night. Truth be told, many sports fans make a much greater offering of time, energy, and effort for their teams than many Orthodox do for the worship of the Church.  There is no question that more families and kids make participation in athletics a higher priority than participation in the worship of God.  Some who cannot imagine making time for vespers or matins, for example, think nothing of enduring the hardships of sports practice for hours in very hot or cold temperatures.

It is all a matter of priorities, of course.  Human beings are going to worship something, and in our culture athletics has become a god to many people.  There is certainly nothing wrong with sports in and of itself, but the excessive focus that so many place on it should serve as a reminder that the true race is not for the perishable crown of the praise of others, but for the imperishable crown that God gives to His true and faithful servants. Instead of judging anyone, we should be reminded by the dedication of sports enthusiasts that it is human nature to sacrifice for what we love and to take joy even in daunting tasks that require discipline and steadfast commitment.  If athletes and fans devote so much for what amounts to healthful entertainment, how much more should Orthodox Christians devote themselves to fighting their passions, serving Christ in their neighbors, and participating in the collective worship of the Church as a foretaste of the Heavenly Banquet?

Let’s be clear:  To worship the stomachs, sexual desires, and athletic abilities of human beings is simply to commit idolatry and degrade ourselves.  In contrast, to offer them and every other dimension of our life and world to God is to embrace the calling to grow in the divine likeness.  That’s not an escape from reality; instead, it is our pathway to real life in a universe created, redeemed, and sustained by God.  All creation finds its proper place and fulfillment in Him, including you and me.