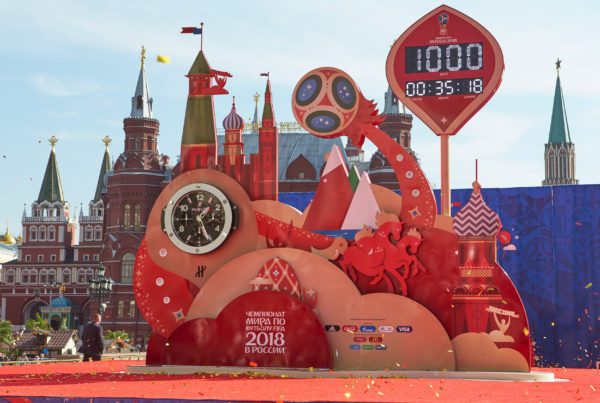 I am not sure how closely my American friends have been able to follow the World Cup and the impact of the games on life here in Russia. It has been big! Frankly, I know very little about soccer, aka “football” over here in Russia. (I hate calling soccer “football,” but I’m a minority of one here.) The only soccer games I’ve ever watched was when one of my sons was on the high school team back in South Carolina. I went to every game I could, but I learned almost nothing about the game. My son got a team trophy, but I couldn’t even figure out what “offside” meant. They all were running back and forth all over the field! I guess “football” for me will always be the American version.

The games, however, have had a tremendously positive impact on Russia on more than one level. First, the Russian team was not expected to do well at all. I read one article that said they were something like the 68th ranked team in that writer’s view. Yet they made it to the quarter finals—and almost won that game. I watched their match against Spain and became a nervous wreck. They won on an unbelieveable save by their goalie. Thus, I did not watch their game against Croatia because it was at night, and I knew I’d get too nervous and lie awake too long. Despite the fact they lost that very close game, the people here were still very proud of their team. Russia had something else to cheer about. In addition to the unity created by pulling for their team, however, there are other “victories” or benefits.

First, there have been financial benefits for Russia. There were some rumblings in a few circles that the government was having to spend too much money on preparing for the games. They suggested the cost was too big a burden on the budget. Most countries, they pointed out, actually lose money on hosting such events. I watched a video of an interview with Sergey Budrunov, the president of the International Union of Economists, as he explained the cost and benefits of the game. (The video can be seen with English subtitles and transcript here ). It cost Russia between $10-$11 billion to provide 12 new stadiums, 5,000 miles of new roads, upgrades to already existing roads and making sure airports and other public service locales were ready for the expected crowds. That’s a lot of money and the Federal Govt. would have to provide well over half of it. Big crowds came, however, and the revenues from ticket sales and associated prices to customers will pay for the cost involved. Mr. Budronov said that by the time the games are over the costs will have been recovered. Profits stand to be substantial from the future revenues that will come in through sales tax on shirts, souvenirs, hotels, food, etc. Judging from the clips I’ve seen of fans eating, buying clothes, gifts, parties, etc., that profit should be substantial. Some estimates say Russia will recover 5 times what they spent. Also, the new stadiums, new roads, and upgraded infrastructure will still be in place after the games are over. There will be future profits to be added from these improvements in the years to come.

Second, the bigger pay off, in the opinion of many, is in the area of what I’ll loosely call “Public Relations,” although “International Relations” may actually be more appropriate. There have been many interviews shown here with fans from many countries who testify to how different their experience in Russia has been from what they were told to expect. Most admitted they came here with a significant apprehension because of what they had heard about Russia. Many from the Western countries said they were warned not only of criminals, but also maltreatment they would probably receive from the Russian police and the Russian “hooligans.” In interview after interview we heard from visitors from all over the world praising Russia and the treatment they received here. Some said police did check their documents, but usually with a friendly smile. Several recounted that when taxis were overwhelmed by the crowds they were given free rides from “regular” folks who did not charge them anything and would not take money when offered. Our son Roman went into the “center” of St. Petersburg and said the atmosphere was great. He said from the languages he heard there were more “foreigners” than Russians out in the streets and all seemed to be having a good time. My FB friends who are “real” European football fans reported the same in their experiences at the games and the parties after the games.

It hasn’t been just the fans talking about the dissonance between what they were told to expect and what they actually have experienced, however. I read many reports filed by journalists from outside of Russia reporting on the same phenomenon. The one that surprised me the most was by Steven Goff of The Washington Post. The Washington Post has been one of the “lead dogs” in anti-Russian propoganda production. Goff admits even up until the last moment he was wishing he did not have to go to Russia. His experiences here were not at all what he expected, however. It turned out to be a wonderful experience and his description of Russia is quite different from what one expects to find in The Washington Post. I have no doubts that the anti-Russian propoganda will continue, but for those who have been paying attention it will be a harder sale. It was gratifying to me and to other Americans living here in Russia to see and hear of the experiences of others who discovered the truth of what we have been saying: the Russia you read about in the main stream Western press is a creation motivated by the political and/or social agendas of the writers.

If someone like me who came from a devout Protestant background, gained ordination and degrees in that tradition,…

I have not written a blog for quite some time for two reasons. First, there has been a…