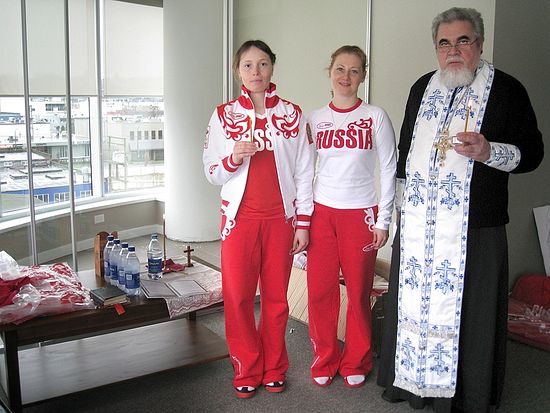 “I haven’t seen it during other games that sportsmen asked to conduct thanks-giving prayer services to the Lord as He gave them an opportunity to win rewards and preserve health. They prayed for their relatives and uplifted thankful prayers for their trainers, sportsmen, instructors. It is very joyful that athletes have changed in their spiritual attitude,” the priest told the Zemlya i Nebo journal in his interview.According to him, if Russian Olympic athletes had earlier “stayed away from the chapel, and looked at the priest with precaution, this time everything was very open and sincere.”When athletes had a chance, they tried to take the priest’s blessing, many of them made the sign of the cross when leaving for sport competitions, and some of them even took a communion during the Liturgy.Father Nikolay has participated in the Olympic movement since 2004 as athletes’ spiritual guide. In 1980 as Patriarch Pimen’s referent he took part in arranging a prayer room in the Olympic village.“Atheistic government was sure that all our sportsmen were atheists. But it was necessary to provide a room for prayer for foreign athletes – Christians, Jews and Muslims. And in Athens I became a spiritual guide of the Olympic team. I was with our teams during the games in Torino, Vancouver and Beijing. Prayer services were conducted in Moscow before these Olympic games,” he reminded.

Most viewed articles
Seven Lessons for the New Year from St. Seraphim of Sarov246
A Great Time to Join the Orthodox Church206
New Jersey Governor Signs Bill Legalizing Abortion Up To Moment of Birth107
The Way of Christ Is The Way of Love75
Metropolitan Hilarion Celebrates the 20th Anniversary of His Episcopal Consecration59
Brooklyn Street Co-Named for Antiochian Pastor Who Served a Half Century There52
Metropolitan Hilarion: the Church and traditional confessions have done everything possible to improve the situation in Kazakhstan49
My World’s Different11
The Apostles’ Fast and Theology1
1
Most popular authors
Priest Luke A. Veronis246
Frederica Matthewes-Green206
Pravmir.com team108
Ryan Foley107
Fr. Theodore Stylianopoulos75
Peter Samore52
Protopresbyter Themistoklis Mourtzanos11