For the first time since 90s, Uniates tried to capture an Orthodox church by force 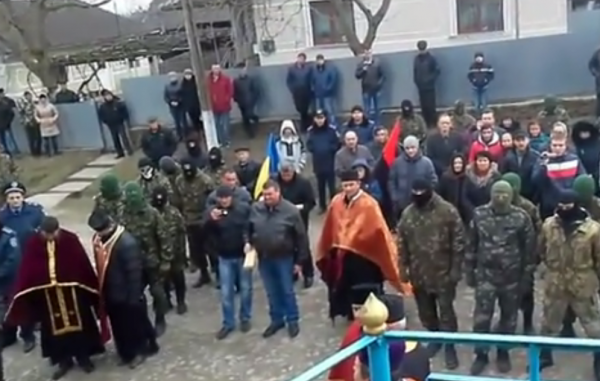 The rector of the church of the Nativity of the Most Holy Mother of God at the Stenka village, Buchatsk district, Ternopol region, Father Vasily Moisyuk, has reported that at about 15:00 on Sunday, March 22, a group of UGCC clergy clad in vestments committed an act of provocation near this church. These actions of the Uniates were supported by the Buchatsk district council deputy Andrey Buchinsky (All-Ukraine Association ‘Svoboda’). Taking part in the action were also over 50 young people in balaklavas and fatigues, who impersonated the Right Sector representatives. They tried to get into the church allegedly for prayer. The faithful of the local Orthodox community refused to let them in, explaining that anyone can come into a church during the liturgy, but one can only come into a house of God without weapons and with one’s face open.

According to the chief of the Ternopol regional police Alexander Bogomol, reinforced law-enforcement units were used to prevent a violent conflict on the religious ground at the village. During a press conference he said that the Right Sector activists had come to support the UGCC representatives. The conflict itself, he said, was that ‘the UGCC sought after a possibility for holding celebrations in the church that is used by the Ukrainian Orthodox Church. The Right Sector representatives tried to stand up for the position taken by the UGCC community’.

Alexander Bogomol noted that representatives of the local authorities promised to take actions to ensure a possibility for the both communities to worship in peace.

At 17:30 on the same day, the Greek Catholic priests and the Right Sector representatives gathered together near the UGCC chapel located in the same village. During that gathering, radicals yelled insults at the Orthodox faithful and assurances that Uniate priests will enter the Orthodox church of the Nativity of Our Lady by all means in a matter of days.