NEW YORK – Fordham University conferred yesterday, January 28, 2014, an honorary doctorate degree of Humane Letters, the highest honor of the University, to His Beatitude Archbishop Anastasios of Tirana, Durrës and All Albania, in an official ceremony at Fordham’s University Church. Following the conferral, His Beatitude delivered the “Orthodoxy in America Lecture” on the topic Sharing the Good News in a Multi-Religious Country: Theological Reflections on Other Religions. 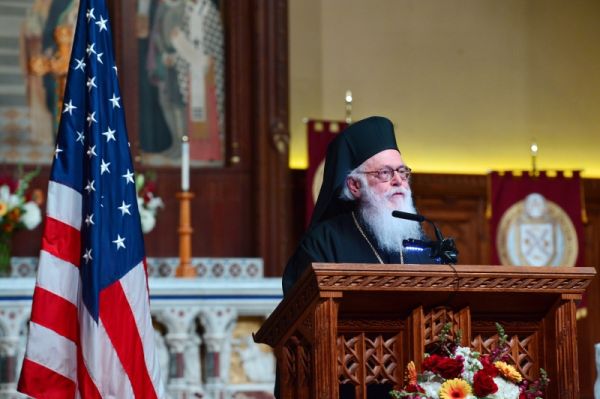 His Beatitude Archbishop Anastasios of Tirana, Durrës and All Albania delivering his address.
(photo © Dimitrios Panagos/GOA)

“Your name suggests, speaks and points to the Resurrection as does your ministry,” said Fr. Joseph M. McShane, S.J., the president of Fordham in his welcoming remarks. Fr. McShane welcomed Archbishop Anastasios to the Fordham family saying that the University considers itself blessed to be a home for Orthodoxy and have the only Orthodox Studies program in the United States.

His Eminence Archbishop Demetrios of America offered the invocation, preceded by short introductory remarks in which he acknowledged “the distinct honor for him to welcome as a member of Fordham, his brother hierarch Archbishop Anastasios.”

Dr. Stephen Freedman, the University’s Provost, read the citation recognizing Archbishop Anastasios “as an inspirational leader who is always willing to go where God calls him, as a great contemporary hierarch of the Orthodox Church, an outstanding scholar and a visionary theologian, and his strong support for coexistence with people of all faiths,” noting especially the triumph of resurrecting the Orthodox Church of Albania.

Archbishop Anastasios was accompanied by faculty sponsors, the two co-founders of the Orthodox Christian Studies Center of Fordham, George Demacopoulos who is also the Center’s director and professor of Historical Theology; and Aristotle Papanikolaou, who holds the Archbishop Demetrios Chair in Orthodox Theology and Culture and is a Senior Fellow and Professor of Theology.

President Fr. Joseph M. McShane, S.J. and Nora Ahern Grose, Secretary of Fordham University Board of Trustees conferred the honorary degree to His Beatitude as the faculty and the guests exclaimed ‘Axios,’ the Greek word for “He is worthy.”

Archbishop Anastasios, filled with sentiments of gratitude, thanked the University for honoring him and delivered his address recounting his didactic experiences in Albania since 1991 when he was first appointed Patriarchal Exarch.  He explained the approach he employed in reviving the Orthodox Church there and in sharing the Good News of the Gospel. In the second part of his address, His Beatitude analyzed what he said were three basic notions and concepts in Orthodox Christian Theology: Logos (Word), Agape (Love) and Fos (Light).

The ceremony and lecture were well attended by Fordham’s Trustees and officials, members of the Faculty and the student body, dignitaries and many clergy and faithful. A reception followed, and the University hosted a dinner to honor their speaker and honoree.