Source: DECR
Natalya Mihailova | 05 August 2015
At the invitation of Hegumen Daniel (Irbits), abbot of the Monastery of St. George in Götschendorf, Mr. Gerhard Schröder, former Chancellor of Germany, visited the Cathedral of the Holy Resurrection in Berlin, Press Service of the Russian Orthodox Church’s diocese of Berlin and Germany reports. 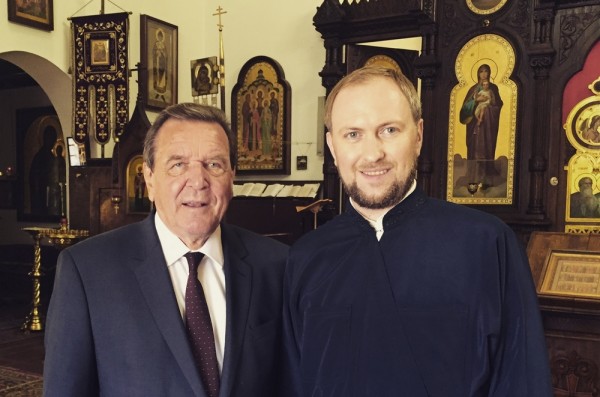 Hegumen Daniel told Mr. Schröder about the life of Orthodox communities in Germany, as well as the story of construction of Berlin’s cathedral. Fr. Daniel presented the high guest with an icon of the Holy Prince Vladimir, Equal-to-the-Apostles, and invited him to the Monastery of St. George which is being built in Götschendorf. Mr. Gerhard Schröder thanked Hegumen Daniel and expressed his wish to visit the monastery in the nearest future.