The Beheading of St. John the Baptist

The whole life of St. John the Forerunner, from its first days, was entirely dedicated to the One Who came after him. In the days of infant massacres in Bethlehem, he was also sought by Herod, and his mother Elizabeth fled with him into the desert, where she died on the fortieth day. About the same time, his father Zacharias was killed by the servants of Herod, in the Temple.
Saint John of Shanghai and San Francisco | 10 September 2008 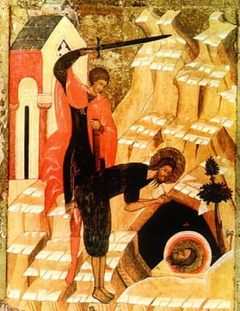 “Having suffered for the truth, thou hast gone rejoicing to declare to those in hell the good tidings of God having appeared in the flesh” (Trofarion of the Feast, Aug. 29).

The whole life of St. John the Forerunner, from its first days, was entirely dedicated to the One Who came after him. In the days of infant massacres in Bethlehem, he was also sought by Herod, and his mother Elizabeth fled with him into the desert, where she died on the fortieth day. About the same time, his father Zacharias was killed by the servants of Herod, in the Temple. The desert raised John, and he remained there in silence, for thirty years, until the word of God came unto him, commanding him to preach repentance and call on men to prepare the way of the Lord (Luke 3:2).

About half a year after the beginning of his ministry, having prepared the Jews to expect the speedy coming of the Messiah, and surrounding himself with disciples, most of whom became the first disciples of Christ, John the Baptist, baptized Christ. The mystery of the Holy Trinity was then revealed to him. Having informed those with him, that the Lamb of God that taketh away the sin of the world was present, John gradually faded into the shadows and everyone began follow the new Teacher.

However, John rather than grieving over this, rejoiced. When his especially devoted disciples asked him about his lack of concern over his decreasing fame, he replied with words that clearly expressed his personality. “I am not the Christ, but I am sent before Him. He that hath the bride is the bridegroom: but the friend of the bridegroom, who standeth and heareth him, rejoiceth greatly because of the bridegroom’s voice: therefore this my joy is fulfilled. He must increase, but I must decrease” (John 3:28-50).

Soon after this, his word thundered forth, accusing Herod, so he was cast into a prison, where his earthly life ended. He was beheaded during Herod’s banquet. The beheading of St. John the Baptist, which cut off his earthly life, at the same time, started his new and glorious ministry as Forerunner.

The soul of St. John the Baptist, departing his ascetic body, went to hell, the place where the souls of all who died before the Savior’s death on the Cross. The souls of everyone beginning from Adam were here.

However, the holy and righteous soul of St. John the Baptist did not go there in order to experience a dark condition of alienation and distance from God. The “friend of the Bridegroom,” who had baptized Him, suffered for his righteousness, bore the hope of the coming Kingdom of God, preached to all preparing the way for Him, was inseparably bound to Him through his devotion, testifying everywhere for Christ, as His messenger, sent before Him..

Having descended to hell, John continued the ministry that he had performed on earth—the preaching about the Kingdom of God drawing near. The souls of the righteous ones, from the Old Testament were languishing in hell, awaiting the fulfillment of the coming of the One Who would conquer the serpent, as had been told to Adam by God. The prophets, who had seen beforehand in spirit, the coming of the Messiah awaited the fulfillment of the revelations that had been made to them. These souls, deprived of the light of God’s glory, tormented with waiting for the fulfillment of their hope, John came, having descended to hell, bringing the Joyful tidings that soon the kingdom of hell would be destroyed. Those who awaited the Redeemer would soon behold Him and be liberated by Him. John testified that the Son of God had already come to earth and that after baptizing Him, he had witnessed the Holy Spirit descending and remaining on Him (John 1:33-34).

The preaching of John concerning the coming of the Messiah was addressed not only to the souls of the righteous, but to all who were in hell. He appeared in hell to prepare the way of the Lord, just as he had prepared it on earth. John the Baptist’s descent to hell and his preaching of the Gospel was the proclamation of joy to those who were languishing there.

The souls of all the dead, save for the most inveterate sinners, heeded the preaching of the Baptist. Therefore, when Christ descended to hell after His death on the Cross, He was greeted not only by the Old Testament righteous ones, but also by the souls of those who once were disobedient and opposed the long suffering of God in the days of Noah and during the rest of the time that sin reigned among men (1 Peter 3:20).

Hell was destroyed by the Christ’s soul descent into it; the dark confinement shone with light; the souls of the reposed were led into the Kingdom of Heaven. The entryway to this ruin of hell was the descent of the Baptist. Having fulfilled his ministry as Forerunner on earth, he appeared as the Forerunner of Christ, in hell. His beheading is not only the culmination of his earthly exploit, but also the beginning of a new and glorious ministry.

Among them, that are born of women, there hath not risen a greater than John the Baptist (Matt. 11:11; Luke 7:28), Christ said of him. This is he, of whom it is written, Behold, I send my messenger before Thy face, which shall prepare Thy way before Thee (Luke 7:27).

These words of the Lord Himself, testify of the spiritual greatness of John and his high purpose in the work of the salvation of the human race. He appeared as the servant and preacher of God as no other single man in the world, having begun to preach and praise Christ before his birth, and finishing it even after his death, ascending with Christ into the Kingdom of Heaven after the destruction of hell. As the greatest of the righteous, a worthy place was prepared for him in the Kingdom of his Friend, where he remains now, awaiting its revelation in all glory and the triumphant feast of the Lamb of God in the Second Coming, when He will gather His wheat into the garner, but He will burn up the chaff with unquenchable fire (Matt. 3.12; Luke 3.17).

His beheading was his final exploit on earth, and the last step for the receiving of the greatest reward in the Kingdom of Heaven; while for all those in hell it was the rising of the morning star, before the appearance of the Son of Righteousness.

Just as the nativity of St. John the Forerunner and Baptist is the beginning of the Gospel for the living, so is his beheading the beginning of the Gospel for the dead. “The glorious beheading of the Forerunner is part of a certain Divine dispensation, for he preached to those in hell the coming of the Savior” (Kontakion of the Feast). “Be glad, Baptist, and let thy spirit dance: for thou dost accuse the godless Herod, and dost preach to those in hell, saying: Our salvation hath drawn near” (Canticle 4 of the Canon).

“He who came before Thy Birth and Thy Divine Passion is, through a sword, in the nethermost parts of the earth. John, the prophet and messenger of Thy descent there, cries as the voice of the Word: Do ye dead, as Giver of life, do ye blind, as Giver of light, do ye prisoners, as Deliverer, exalt Christ above all forever” (Canticle 8 of the Canon).