Fraternal talk between Primates of the Russian and Bulgarian Orthodox Churches

Source: DECR
Natalya Mihailova | 29 May 2014
On 27 May, 2014, His Holiness Kirill, Patriarch of Moscow and All Russia, had a talk with His Holiness Neophyte, Patriarch of Bulgaria, who on an official visit to the Russian Orthodox Church, at the patriarchal and synodal residence in the St. Daniel Monastery in Moscow. 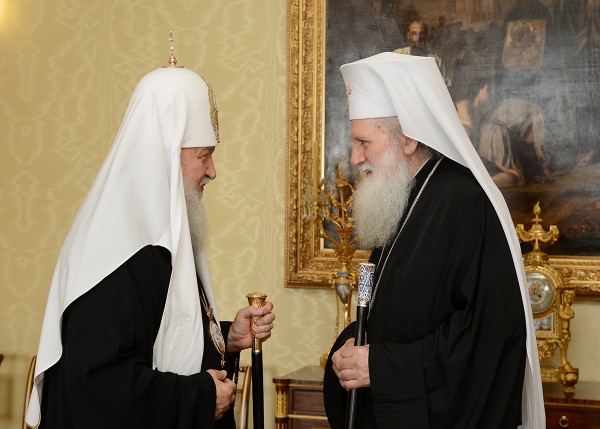 Welcoming Patriarch Neophyte and his party to the old monastery of St. Daniel, the religious and administrative center of the Russian Church, Patriarch Kirill said: “With great satisfaction I testify to the very high level of relations between our fraternal Churches, as no political conjuncture or changes in political views happening in Europe have affected them. It is as it should be because these relations are based on common faith and experience in the struggle for liberation, which is part of the historical memory of both the Russian and Bulgarian nations. Along with it, we had a remarkable system of mutual support and assistance at a time when our Churches found themselves in unfavourable conditions because of the external attitude to them by the authorities. We went through those years together, supporting each other, and I believe it is preserved in our historical memory as well”.

At the recent times when the Bulgarian Church suffered a schism, her grief was taken to heart by the Russian Church which fully supported the stand taken by the late Patriarch Maxim and the Synod of the Bulgarian Orthodox Church. “We are glad that by God’s mercy the church schism in Bulgaria was overcome”, Patriarch Kirill stated, making a special mention of the role played in that process by the head of the Bulgarian royal house, Simeon of Saxe-Coburg and Gotha, when he was Bulgaria’s prime minister.

Patriarch Kirill also spoke of the great changes in Europe witnessed by our contemporaries. Thus, the results of the election to the European Parliament the other day have shown that many Europeans refuse to accept the liberal philosophy requiring that fundamental ethical values be rejected and challenging the foundations of national self-awareness. “It is my profound conviction”, he noted, “that these processes will build up, for the Lord laid the moral principal into human nature. For this reason, any law adopted against this principle provokes people’s natural protest”. He cited the events in France when during the debates and adoption of a law challenging the family institution, millions took out to streets in support of traditional values.

“Unfortunately, the decision-making mechanism is such that a few voices in the parliament outweighed the will of millions”, he continued, “But such victories cannot be lasting, and what is taking place in Europe today, in my view, is a reaction to the unrestrained liberalization of moral values, which challenge the very moral nature of man and imposing on people the behaviours believed to be sinful by Christians and ethically unnatural. Therefore, I am deeply convinced that despite the fact that the battle seems to be lost now, as long as the Lord keeps His providence with regard to the human race, we still set our hopes on His mercy in all the difficult situations that Christian nations are going through”.

The Primate of the Russian Church also spoke for all-round development between the two countries, among other things, promoting pilgrimage as making possible for people to venerate the shrines of the other Church and people. “We can see a very large increase of the interest in pilgrimage, including in our society. It is also true for Ukraine, Belarus, Moldova and other countries under the pastoral care of the Russian Orthodox Church”, he said.

His Holiness Neophyte expressed gratitude for the kind words and warm welcome accorded him and his delegation.

He underlined the great importance of the construction of a church of St. Cyprian the Metropolitan of Moscow and All Russia, a Bulgarian by origin, in Moscow, a detailed account of which was given by Patriarch Kirill. In Bulgaria, he said, a bank account has been opened for raising funds to contribute to the construction of this church.

Patriarch Neophyte also spoke about the upcoming millennium of the dedication of St. Nicholas’s in Sophia and suggested that high guests from the Russian Orthodox Church participate in the celebrations to be held on December 6.

The two patriarchs also discussed other matters concerning the bilateral relations and the pan-Orthodox cooperation, especial in preparations for a Pan-Orthodox Council.

In conclusion of the meeting Patriarch Kirill awarded Patriarch Neophyte the Order of St. Sergius of Radonezh. High church awards were also given to members of the Bulgarian delegation.