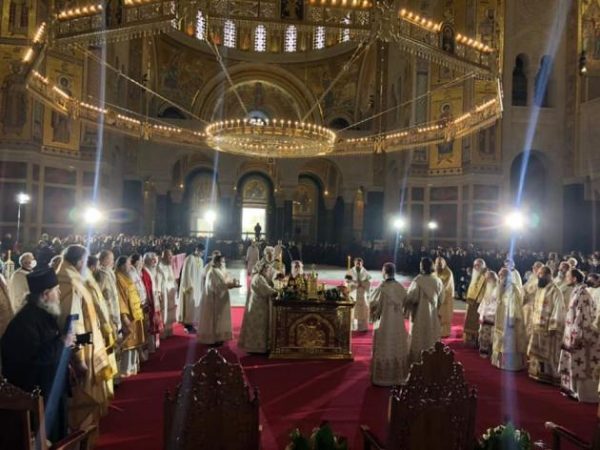 On the occasion of the repose of the Serbian Patriarch Irinej, the Divine Liturgy was celebrated in the Church of St. Sava in Belgrade on November 22, while the body of Patriarch Irinej of blessed memory was laid in the centre of the large church.

The funeral Liturgy, Funeral Rite and Burial were attended by the President of the Republic of Serbia Aleksandar Vucic, members of the Crown Council, representatives of the highest cultural, scientific and public institutions, members of the diplomatic corps, Apostolic Nuncio in Belgrade Archbishop Suriano Luciano, Roman-Catholic Archbishop of Belgrade Stanislav Hocevar, representatives of traditional Churches and religious communities in Serbia.

Members of the Serbian Army and Police, together with their people, honored the late Serbian Patriarch Irinej in the most dignified manner, thus confirming their unity with the Serbian Orthodox Church and testifying that together they are centuries-old, lasting and strongest pillars of the Serbian state. The Serbian Army guards carried the coffin with the body of the Patriarch of blessed memory and formed honorary lines both in front of the Cathedral and the Church of St. Sava.

A team of artists from the Russian Federation, headed by the prominent people’s artist Nikolai Muhin, who for years under the watchful eye of the Patriarch performed works on the interior decoration of the church of St. Sava, honored the Serbian Patriarch by their presence.