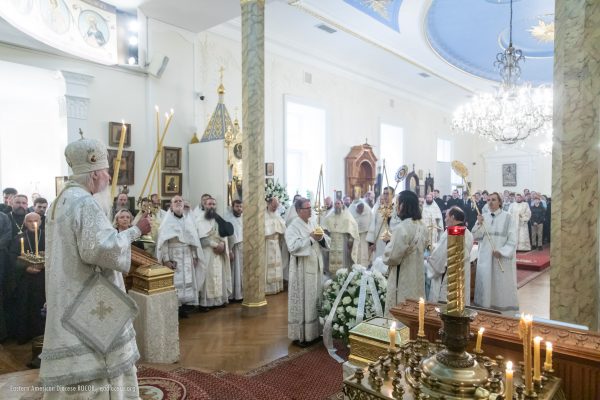 On Saturday, May 21, 2022, the feast of the Holy Apostle and Evangelist John the Theologian, the monastic funeral of the newly reposed First Hierarch of the Russian Church Abroad, His Eminence Hilarion, Metropolitan of Eastern America and New York, was held in the Synodal Cathedral “of the Sign” in New York City.

Earlier that day, Metropolitan Mark celebrated Divine Liturgy in the Cathedral “of the Sign,” with archpastors, representatives of Local Orthodox Churches, and many clerics taking part.

Condolences on the repose of the First Hierarch of the Russian Church Abroad were received from His Holiness Patriarch Kirill of Moscow and All Russia, Metropolitan Onouphry, His Eminence Metropolitan Jonathan of Tulchin and Bratslav, His Grace Bishop Longin of New Gracanica (Serbian Orthodox Church), His Eminence Metropolitan Joseph (Antiochian Archdiocese), and from a large number clergy and laity. They all speak of the reposed Metropolitan as a humble monk, a man of fervent prayer, a zealous server, and a good archpastor, in short, a true Christian. Condolence continue to be received.

Archpriest Victor Potapov (dean of the Capital Region Deanery) delivered the eulogy. Fr Victor and His Eminence were roommates and friends together in Holy Trinity Seminary, which they graduated together in 1972.

After bidding farewell to the First Hierarch of the Russian Church, the coffin carrying His Eminence’s body was taken to Holy Trinity Monastery in Jordanville, NY, where on Sunday, May, 22, the feast of the Translation of the Relics of the Holy Hierarch Nicholas the Wonder-worker and the anniversary of the repose of Metropolitan Anastassy (Gribanovsky; +1965), a solemn panihida was be served, followed by the monastic burial rite of Metropolitan Hilarion in the monastery brotherhood cemetery.