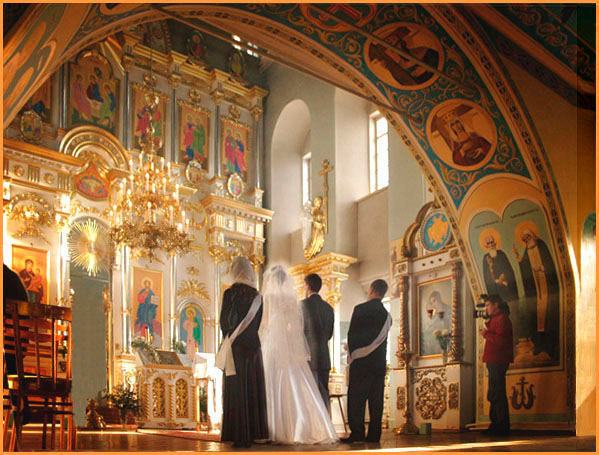 We, the Orthodox clergy of Houston and Southeast Texas, are compelled by our responsibilities before God to speak out plainly against the rebellion against God’s created order that we see being waged on both the local and national level.

It is God who created the two sexes, and established marriage at the time of creation, as our Lord Jesus Christ tells us:

“But from the beginning of the creation God made them male and female. For this cause shall a man leave his father and mother, and cleave to his wife; and the two shall become one flesh. So they are no longer two but one flesh. What therefore God hath joined together, let not man put asunder” (Mark 10:6-10; cf. Genesis 1:27; 2:24; 5:2).

The so called “Houston Equal Rights Ordinance,” is nothing of the sort; but rather gives a man who wishes to consider himself a woman, on a given day, the right to use women’s restrooms in the city of Houston. Such a man need not have even had a “sex change” operation, or even dress like a woman, since “gender” is considered to be a state of the mind rather than a biological fact. After the City council approved this unjust law, Christians of all races, denominations, and political affiliations organized a petition drive, which resulted in far more than the required number of signatures to get the issue on the ballot. But Mayor Annise Parker, disregarding the law, simply chose to disregard the will of the people and their right to vote in accordance with the law. She also used the occasion to unconstitutionally subpoena the sermons and private pastoral correspondences of pastors who were not even a party to a lawsuit that is seeking to force the Mayor to simply obey the law and allow the citizens of the city of Houston their right to vote. We wish to express our support for the fight against this unjust law, and the unlawful actions of Mayor Annise Parker, and we call upon her to cease ignoring the will of the people — which she clearly knows does not support her actions, or else she would not fear leaving the matter to them.

The question of “gay marriage” is also before the Supreme Court, and it is feared that they will impose “gay marriage” on the entire United States. We want our parishioners, fellow citizens, political leaders, and our nation’s judges to know that if this is done, it will be a violation of the letter and the spirit of the United States Constitution. More importantly, it will be an act of rebellion against “the Laws of Nature and of Nature’s God.” We have laws respecting marriage because only heterosexual relationships are capable of producing children, and those children are best provided for and properly raised within the context of traditional marriage.* Homosexual relationships cannot possibly produce children, and so cannot possibly fit the meaning of the word “marriage,” neither should the state concern itself with recognizing such relationships. Homosexual couples also cannot provide both a mother and a father to a child, and so should not be allowed to adopt children.

The Declaration of Independence correctly states that our rights come from God, not from the state. The state can either justly protect those rights, or unjustly violate them. No government, much less an unelected court, can justly proclaim something to be a right which violates God’s natural order. The only way society can accommodate the demands of homosexual activists to call their relationships “marriage” and to allow everyone to pick which restroom they desire, is to ignore that men and women are different and have unique characteristics, and to pretend that there is no difference between a mother and a father. This can only be accomplished if we all deny that which we know to be true, and “suppress the truth in unrighteousness” (Romans 1:18).

Let it be known that we will never recognize such laws or judicial decrees to be either right or just, nor will we be intimidated into silence, but will continue to obey God rather than men (Acts 5:29), and proclaim the whole counsel of God on these issues (Acts 20:27).

*Infertile heterosexual couples are still capable of providing adopted children with both a mother and a father. Also, having children, while a primary purpose of marriage, it is not the only purpose for marriage as far as the Church is concerned; however, having children is the only reason why the state has a legitimate interest in marriage.

More names from the clergy association are likely to be added