Source: Democracy & Freedom Watch
Natalya Mihailova | 17 November 2016
TBILISI, DFWatch–Clergy from the Georgian Orthodox Church describe getting rid of some misconceptions about NATO and EU after a visit to Brussels last week. 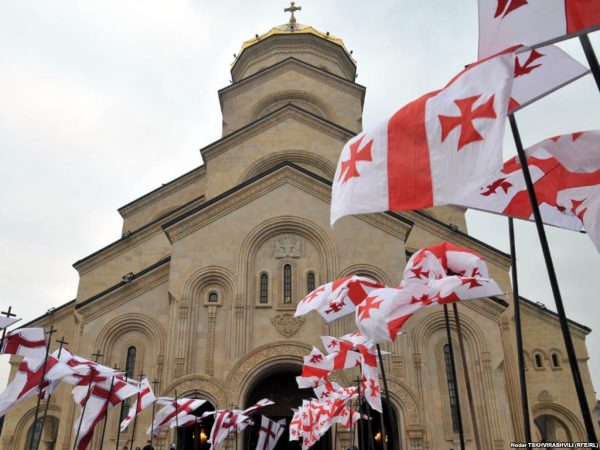 The unprecedented visit started November 7 with Georgian clergy meeting NATO’s envoy for South Caucasus and Central Asia, James Appathurai. This is the first time clergy have held an official meeting at NATO headquarters in Brussels.

The trip also included meetings with the EU including the European parliament.

A few days after returning, the Patriarchy summarized the unusual trip in a statement.

“It […] turned out that both at NATO and EU, they had a wrong perception of the Georgian Church, and we also had a wrong impression about their policy toward a number of issues,” the statement reads.

There are two examples described in the statement about ‘wrong impression’ – one is about removing religion from the school program allegedly because of western policy, and the other one is about ‘certain powers’ in Georgia resisting a proposed constitutional amendment to define marriage as a union of a woman and a man because it allegedly is against the European integration process.

These are quite acceptable conditions for the EU structures, the statement reads.

The Church believes that the Georgian people must decide whether the country should join EU and NATO.

“The church respects people’s choice and believes that the most important is that:

-Georgia is independent;
-Georgia’s territorial integrity is restored;
-The development of the country proceeds in keeping with traditional values.

Priests have been weary of their country being gradually dragged into Brussels’s sphere of influence, not least because of a new anti-discrimination law which the EU set as condition for approving visa-free travel into the Schengen area. The law was seen as promoting gay rights. The Patriarch, head of the Church which has been independent since the third century, said once that he was glad that gay marriage is not a requirement for joining the EU.

Korneli Kakachia, head of the Institute of Georgian Politics, told DFWatch that the visit was at the same time weird and interesting.

Part of Georgian society believes the Georgian Church is an arm of Russia’s soft power and some church representatives send out messages that EU is a threat to Georgian values and identity.

“These meetings will send a message that the Georgian church supports EU integration.”