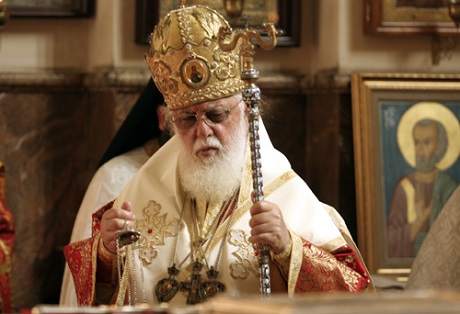 Patriarch of Georgia Ilia II addressed the celebrating church-goers with his annual Christmas epistle today. Photo by the Patriarchate

Prior to Christmas masse last night at the Holy Trinity Cathedral in Tbilisi, the Patriarch touched on issues of love, faith in Jesus Christ, service to God and other topics in his address to the Church’s faithful.

He stressed the importance of the unity of all peoples living in Georgia.

The Patriarch believes the unity of Georgians, Ossetians, Abkhazians, Greeks, Russians, Ukrainians, Jews, Assyrians, Udis, Armenians, Azerbaijanis, Kurds, Kists (Chechens), Dagestanis, Circassians and all of those living in Georgia would strengthen the country.

The Georgian Orthodox Church leader had the following to say on laws established by God and the State:

“But Jesus stated that not only these wrongdoings are a sin, but it’s also a sin to not have love and respect for our well-wishers and to have bad thought in mind.”

Ilia II’s Christmas epistle was notably different this year in its mentioning of differences between divine and State laws. Both, he said, are meant to benefit and guide the people, but large differences exist between them:

“This especially applies to those countries where some of state laws go against morality and there is an attempt to officially legalise a sin”, Ilia II said.

“In parallel to this, television, mass media and social networks make this immorality look attractive and help to promote sins.”

Georgia celebrates Christmas on January 7 due to the two – week difference between the Gregorian and Julian Calendars. Present at the Patriarch’s Christmas address were Georgia’s Prime Minister Giorgi Kvirikashvili and other government officials.