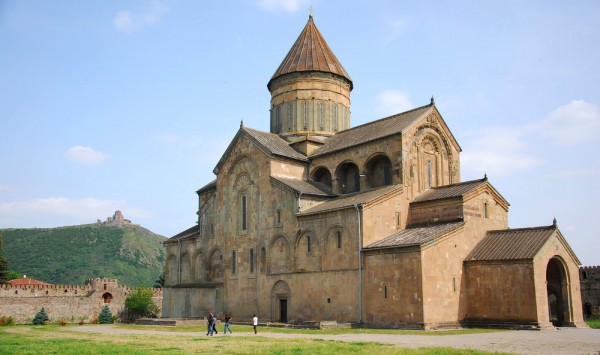 “Mtskheta is regaining its ancient name and full title of a holy city and of Georgia’s sacred capital,” the head of the Georgian Orthodox Church said during Sunday’s liturgy in the Cathedral of St. Trinity in Tbilisi.

The title was awarded to the city in accordance with the last will of Georgia’s first head, Catholicos Patriarch Melkhisedek I, written in the 11th century, Ilia II said.

Georgia’s ancient capital city, Mtskheta, is located 20 kilometers north of Tbilisi at the confluence of two mountainous rivers – the Aragvi and the Kura. The city’s numerous holy sites have won it the name of Second Jerusalem. One of the greatest Christian relics, the Holy Coat, is kept at the Svetitkhoveli Cathedral. This treasure is reason why Mtskheta is called a holy city, a place where Christian pilgrims and tourists come from around the world.

A legend goes that Mtskheta was founded by King Mtsekhotos, the son of the first king, Kartli, who built the city and gave his name to it. Historical records say that the city was founded in the second half of the first millennium B.C., almost when the Eastern Georgian Kingdom of Kartli with the capital, Mtskheta, was formed.

Mtskheta had the status of capital city for almost a thousand years, until the end of the 5th century A.D., when King Vakhtang Gorgasali ruled to move the capital to Tbilisi. But even after that, Mtskheta remained an important religious center and residence of the Georgian catholicoses.

In the late 19th – early 20th century Mtskheta and its environs were declared an architectural and historical preserve and entered on UNESCO’s world heritage list. Part of it is the Dzhvari monastery church, a 6th century monument, built at the dawn of Christianity in Georgia and immortalized by the great Russian poet Mikhail Lermontov in his poem Mtsyri.