The German Diocese Hosts a Seminar

Source: ROCOR
Natalya Mihailova | 01 January 2015
On December 25-27, 2014, the annual Orthodox Christian Open Seminar was held in Munich, Germany, which traditionally draws parishioners from Germany as well as Russia, Ukraine, Belarus and many other nations. 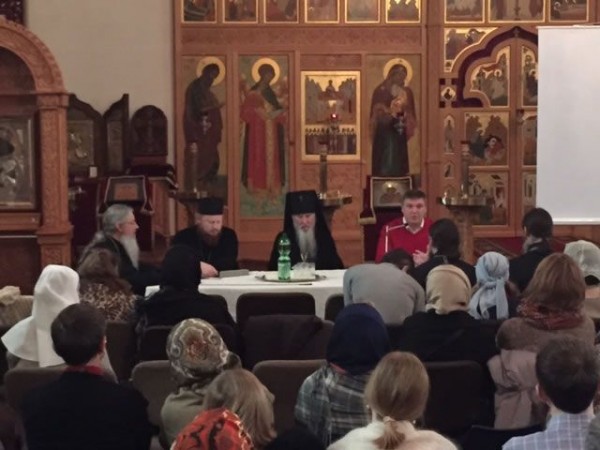 The event opened on December 25, which is an official holiday in Germany, giving locals the opportunity to participate, with a moleben performed by His Eminence Archbishop Mark of Berlin and Germany of the Russian Orthodox Church Outside of Russia, diocesan clergymen, His Grace Bishop Iona of Obukhov, Vicar of the Kiev Diocese, who is also the President of the Synod Youth Department of the Ukrainian Orthodox Church; as well as Protopriest Andrei Sommer, Vice President of ROCOR’s Synodal Youth Department.

This year’s seminar was joined by a youth forum which began on December 22 under Bishop Iona and Fr Andrei, along with other diocesan clergymen of Germany. Lectures, presentations and discussions were included in the event, as well as tours of Munich and its environs, games and luncheons in which youth from Germany, Russia, Ukraine, Belarus, other European countries and the United States participated.

The subsequent Orthodox Seminar opened with a greeting by Archbishop Mark. Priest Alexei Limmer read a speech on St Sergius of Radonezh, the 700th anniversary of whose birth the Russian Church celebrated this year. That afternoon, Professor AM Velichko read a lecture entitled “Byzantium: The Grandmother of Christian Civilization.” Vladyka Iona then discussed youth ministry within the Ukrainian Orthodox Church. Ekaterina Yevsyukova, a member of the Synodal Department of Youth Ministry of the Belarussion Orthodox Church then talked about their work. Other speeches followed on church-state relations and the history of the Russian Church.

The next day was dedicated to the topic of pilgrimages. Mr D Kondratiev and Ms I Naumova talked about organizing pilgrimages in Germany, while Ms Ieropes, Senior Sister of Pilgrimages for Minsk’s St Elizabeth Convent made a presentation on their work. The official portion of the seminar concluded with a speech by Protopriest Nikolai Artemov: “Contemporary Science and Eternal Faith in Divine Providence.”

But the most important aspect of the event was joint participation in divine services. The conference members, numbering over a hundred, were treated to a trapeza luncheon by the Munich parishioners. The monasteries and parishioners of Munich provided lodging for the conferees. The prayerful atmosphere and opportunity to share experiences played an important role in the success of the event.

ROCOR’s clergymen of Germany then departed for Hamburg to participate in a diocesan council meeting.