Get Out of Hell Free 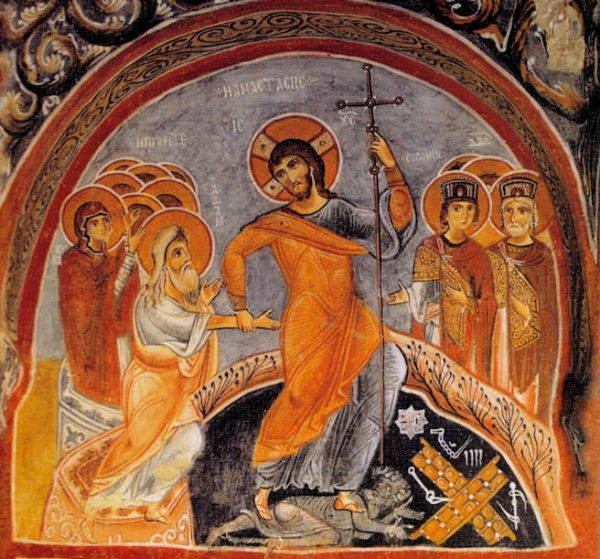 The Saturday before Palm Sunday is known as Lazarus Saturday among the Orthodox, and they celebrate Christ raising him from the dead just prior to His entrance into Jerusalem (gospel of John). It is a feast that offers something of a preview of Christ’s resurrection, and a foretaste of the General Resurrection at the End of the Age. Some years back I sat in a cave that is purported to be the grave of Lazarus. I could not help but think of him – but of him in Hades rather than the tomb. It is said in the Fathers that when Christ raised him from the dead, it was necessary for Him to say, “Lazarus, come forth!” For had He only said, “Come forth!” all of the dead would have risen before their time. It’s a thought that I like a lot.

It is also, however, a thought that has occurred to Hades itself, at least in the hymnody of the Church:

I implore you, Lazarus, said Hell, Rise up, depart quickly from my bonds and be gone. It is better for me to lament bitterly for the loss of one, rather than of all those whom I swallowed in my hunger.

Why do you delay, Lazarus? cried Hell. Your Friend stands calling to you: ‘Come out.’ Go, then, and I too shall feel relief. For since I swallowed you, all other food is loathsome to me.

O Lazarus, why do you not rise up swiftly? cried Hell below, lamenting. Why do you not run immediately from this place? Lest Christ take prisoner the others, after raising you. (From the Canon of Lazarus Saturday)

Most of the Orthodox hymns surrounding Christ’s death and resurrection (and Lazarus’ as well) center on the notion of the “Harrowing of Hell.” The object of the Cross is not the wrath of God, but the death and confinement of man. It is the virtual non-existence that holds us in death that is trampled down by the death of Christ.

The punishment theories of the atonement have a way of mixing moral themes into Christ’s death and resurrection. They are about Christ’s payment for the moral debt of our sins. Somehow, something is terribly askew in such meditations. The utter graciousness and even gratuitous character of Christ’s victory is overlooked.

I am aware of the Biblical passages that speak of the resurrection to damnation as well as the coming judgment. But I always have the sense that those who dwell on such things are somehow afraid that Christ might accidentally forgive someone who should not have been forgiven. Be careful! Someone might get away with something!

When I ponder the atonement, the work accomplished by Christ’s death and resurrection, I tend to think of the imagery of a prison break – a really BIG prison break. When the doors are opened every fellow-prisoner is your friend. You make a run for it because it’s your chance and the sudden generosity that has found you is likely to spill over to everyone and everything. It is like the childhood cry that ends the game of Hide and Seek: “Olly, Olly, Oxen free!”

In truth, despite all of our responsibility for sin, we are largely its victims. We do not begin our lives in Paradise, but in a world in which everyone is broken and distorted. Those who carry out crimes are most likely to have been victims first. We do to others what has been done to us. And sometimes it goes to horrendous extremes. We are psychopaths and sociopaths, addicts and sinners, the children of a world gone wrong.

And though there is help, even salvation for us in this life, many never seem to find it, or being found by it, fail to understand its significance. And now they lie among the dead, bound in their sins, brought down to Hades for their crimes.

It is this fellowship of criminals and sinners that the good bishop, Melito of Sardis, seems to have had in mind when he penned a Paschal homily around the year 160 ad. It is wonderfully primitive in its vision, speaking with a concern that continues to echo in the language of the Orthodox faith. It is hopeful and bold, though perhaps discouraging for those who fear that someone might get off too lightly. He says of Christ in Hades:

[Christ] rose up from the dead, and cried aloud with this voice: “Who is he who contends with me? Let him stand in opposition to me. I set the condemned man free; I gave the dead man life; I raised up the one who had been entombed. Who is my opponent?”

“I,” He says, “am the Christ. I am the one who destroyed death, and triumphed over the enemy, and trampled Hades under foot, and bound the strong one, and carried off man to the heights of heaven.

“Therefore, come, all families of men, you who have been befouled with sins, and receive forgiveness for your sins. I am your forgiveness. I am the passover of your salvation. I am the lamb which was sacrificed for you. I am your ransom. I am your light. I am your saviour. I am your resurrection. I am your king. I am leading you up to the heights of heaven. I will show you the eternal Father. I will raise you up by my right hand.”

This is the one who made the heavens and the earth, and who in the beginning created man, who was proclaimed through the law and prophets, who became human through the virgin, who was hanged upon a tree, who was buried in the earth, who was resurrected from the dead, and who ascended to the heights of heaven, who sits at the right hand of the Father, who has authority to judge and to save everything, through whom the Father created everything from the beginning of the world to the end of the age.