Let Jesus be Your Lazarus 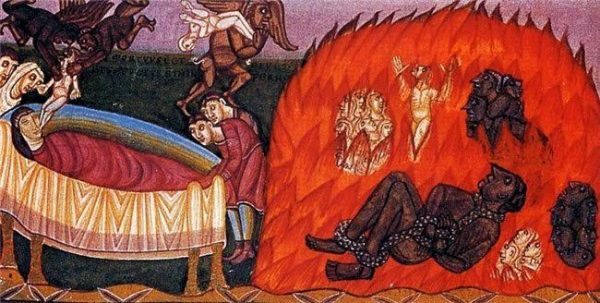 Most of the time, when we read this parable, we focus on the picture of Hades and Paradise. Or we think about the failure of the Rich Man to take care of poor people like Lazarus. Or we consider the fact that in God’s eternity, all unfairness and evil will be repaired and all hurts will be healed by the Peace of Christ.

These are all true and important things. But they are not the main point of this parable. (Besides, it is a perilous thing to establish doctrine on the particular points of a parable that is meant to be interpreted allegorically. I am not sure that this story was primarily intended to form an eschatology.)

The main point of the parable — the whole reason, the moral, for why the Lord told this story — is nested in the last three verses.

By this time, the rich man has given up hope for himself. Things are upside in this life after death. In life, he lived in luxury and comfort. He rarely experienced pain, disappointment or frustration. His lifestyle may have made other people suffer, but that was no concern of his.

But here, no one was taking care of him. He had even asked Abraham, who seemed to be in charge (according to the parable), to send down Lazarus to bring him some water. Lazarus, in life, was just a poor beggar who was supposed to be someone you could order around. But Abraham said that there was no way that Lazarus could make it over the canyon that separated them, there being no bridge.

And, what was really upsetting to the rich man, Abraham said that Lazarus was the rich man now. The tables had been turned.

Maybe for the first time in his life, the ex-rich-man thought of someone else. He had five brothers still alive, and probably still making the same mistake as he. That is, loving themselves, failing to give themselves away, blind to the divine light, refusing to enter into beauty and peace.

So he begged Abraham to send Lazarus — from the dead — to his brothers. This time, not as a servant or a poor beggar, but as someone risen from the dead, so that he could warn the five brothers to mend their ways, so that they could avoid ending up in this horrible situation.

This was a pretty good idea, isn’t it? I mean, someone coming back from the grave ought to rattle anyone enough to get them to believe, to change, to repent.

That might be common sense … but it is simply not true. Abraham said no: “If they do not hear Moses and the prophets, neither will they be persuaded though one rise from the dead.”

The five brothers of the rich man already had all they needed for eternal life.

Miracles, or spectacular signs and wonders, might be enough to start faith, but they are never enough to keep faith going.

We Orthodox understand that salvation is the life-process of deification, in which the Holy Trinity is wrapping us completely in divine love and lifting us through time higher and higher into divine nature.

And — you won’t like this part, maybe — deification happens best during the times and in places that seem the least miraculous. It is when no one is looking that the best acts of mercy are done. It is during the small moments, in the least important-looking positions, when there are few people, when the cameras are turned the other way, when nothing is acknowledged … it is in the dusty corners of life that grace is most miraculous, when only the angels are watching.

So, Abraham said rightly, “your brothers already have what they need” to the man whose riches are now not doing him any good.

“And besides,” he continued, “even if someone does indeed rise from the dead, they wouldn’t be persuaded.”

This is perhaps the spookiest, most haunting sentence in the entire Bible.

Just Who is telling this story about the demand for drama, signs and wonders? Who is the One narrating this parable about what real life is about, what beauty looks like and what peace and light really are?

It is Jesus, of course, the One Who really did rise from the dead.

And there are many like the Rich Man and his brothers who will not be persuaded, who still want poor Lazarus to come and carry water to them, to slake their burning thirst.

Better, far better, to let Jesus be your Lazarus — not through Moses and the Prophets, but through Holy Tradition and the Eucharist — to come and place, with the tip of His finger, to bring His Living Water and cool your tongue.