Get Real for Lent 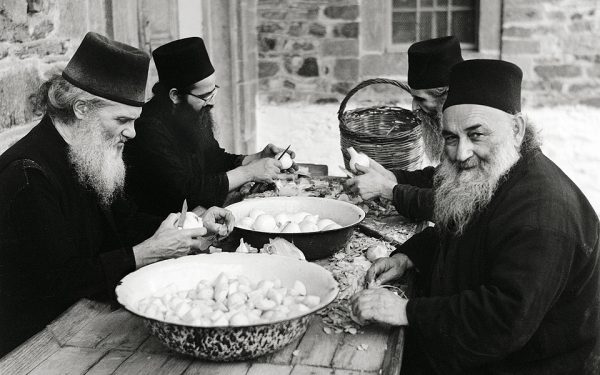 According to St. Basil, God is the “only truly Existing.” Our own existence is a gift from God who is our Creator. None of us has “self-existing” life. We exist because God sustains us in existence – in Him we live and move and have our being (Acts 17:28).

Sin is the rejection of this gift of God – a movement away from true existence.

Much of our attention in the modern world is engaged seemingly with things that have no “true existence.” We engage with illusions, with digital constructs. Our economy allows us to escape the normal necessities such as seasonal scarcity or other mundane concerns. We are increasingly removed from the very environment in which we naturally live.

It is said that astronauts, after spending a prolonged time in space, have lingering effects of zero-gravity. Our bodies are made for gravity and require its constant pull for everything from muscle tone to bone density. But we now live in situations in which many forms of natural “gravity” have been reduced or removed. What effect does the long-term ability to have almost any food at any time of year have on the human body? As someone who has spent the better part of my life at a desk, I can attest to the effect of a sedentary existence. My lower back, my range of motion, the flexibility of my joints are all consistent with the modern white-collar worker.

What effect do such things have on the soul? For the soul requires “gravity” as well. Plato stated in his Republic, that all children should learn to play a musical instrument because music was required for the right development of the soul. We give far too little thought to such things, assuming that no matter what environment we live in, our inherent freedom of choice remains unscathed and we can always decide to do something different, or be something different.

I could decide to run a marathon tomorrow, but I know that the first quarter-mile would leave me gasping for breath and exhausted. You cannot go from 40 years at a desk to the demands of a marathon – just because you choose to do so.

And so we come to Great Lent.

Some see this season of the year as a spiritual marathon. They rise from their sedentary spiritual lives, set off in a sprint and fail before the first week is out. The failure comes in anger, self-recrimination, even despondency.

The first year that I “chose” to fast in the Orthodox manner (it was 4 years before I was received into the Church), the priest I discussed the fast with said, “You can’t keep the fast.” I argued with him until I realized his wisdom.

“Do something easier,” he told me. “Just give up red meat.”

“What about chicken?” I asked.

“Nope. Eat chicken. Eat everything except beef and pork. And pray a little more.”

And so I returned to my Anglican life, a little disappointed that my zeal had made such a poor impression. But my family accepted the proposal and we ate no red meat for Lent. It was, in hindsight, the best Lent my family had ever had. No longer were we musing over “what to give up for Lent,” and instead accepted a discipline that was given to us.

In subsequent years that same priest (who is now my godfather) increased the discipline. And we were ready for it. It is interesting to me, however, that my first experience of an Orthodox fast was being told not to be so strict. The “strict” part was learning to do what I was told. That is sometimes the most difficult fast of all.

Lent is a time to “get real.” Not eating some things is actually normal. In our modern world we have to embrace a natural “gravity” that we could easily leave behind – at least, we have to do this if we want to avoid an atrophy of the soul.

In 2000, the average American ate 180 pounds of meat a year (and 15 pounds of fish and shellfish). That was roughly a third more than in 1959. Scarcity is not an issue in our diet. Our abundance is simply “not real,” and the environment frequently shows the marks of the artificial nature of our food supply. But we have no way of studying what is going on with our souls. What I know to be true is that – as goes the body – so goes the soul. Those who engage the world as consumer are being consumed by the world to an equal measure.

And so we get real.

Getting real means accepting limits and boundaries. Our culture is a bubble of make-believe. It rests on an economy of over-consumption. The crash of 2008 came close to a much greater disaster and could have easily gone into free-fall. Many fail to understand just how fragile our lives truly are. In the season of Lent (and on all the fasting days of the year) we embrace the fragility of our lives. We allow the world to say “no” and take on extra burdens and duties. It is worth keeping in mind that such things do not make us spiritual heroes, first they have to make us human.