Giving up social media for Lent will cleanse your soul, Russians told

The Russian Orthodox Church has long told its followers to give up milk and meat for Lent but when the annual period of self-denial begins on Monday its leaders want the flock to go one stage further.

There should be no tweeting or instagramming of the experience – and no social media at all, in order to better cleanse the soul, according to church spokesman, Vsevolod Chaplin.

“I don’t mean just people who use depraved, entertaining, stupid and empty information,” Chaplin said. “Even useful information, that relates to our work and well-meaning interests, clogs the brain and soul too much.”

Russians should take the opportunity of Lent to give up social media and “look at themselves and the world around them with different eyes”, he said during a press conference this week. 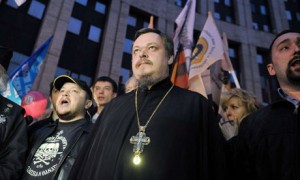 Russian Orthodox Church spokesman Vsevolod Chaplin has encouraged people to add social networking to their list of things to give up for Lent. Photograph: Andrey Smirnov/AFP/Getty Images

“Giving yourself several hours or 15 minutes of time during Lent to not read curses on social networks, but serious texts, serious art, prayer, unhurried conversation with close ones – this is a unique chance to change your life,” he said.

Russia is currently celebrating Maslenitsa, a week-long pancake festival ahead of Lent. Marking Lent has become quite fashionable in recent years, as the church experiences a revival launched with the fall of the Soviet Union.

The Russian Orthodox Church has gained enormous power and influence under Vladimir Putin, the president. It has often spoken out as a reactionary force pushing for conservative values and against influences that are seen as western, like the Internet.

Research by the Levada Centre, an independent pollster, recently found that 79 per cent of Russians consider themselves Orthodox. Yet only 5 per cent attend church regularly.

Last month, Patriarch Kirill, the head of the church and a close Putin ally, told a meeting of bishops that the church should increase its presence online in order to combat anti-religious forces.

“When a person makes a query on church life in an Internet search engine, he finds a lot of lies, hypocrisy and hatred,” the patriarch said, the news agency RIA-Novosti reported. “Blogs, social networks – all offer new opportunities for Christian testimony. To be absent from there means to admit one’s helplessness and reluctance for saving one’s brethren.”