Source: The Christian Times
Natalya Mihailova | 21 April 2016
Pope Francis, the head of the Roman Catholic Church, Ecumenical Patriach Bartholomew of the Eastern Orthodox Church, and Archbishop Iernymos, the head of the Church of Greece, have signed a joint declaration regarding the plight of refugees, asylum seekers and migrants in Europe. 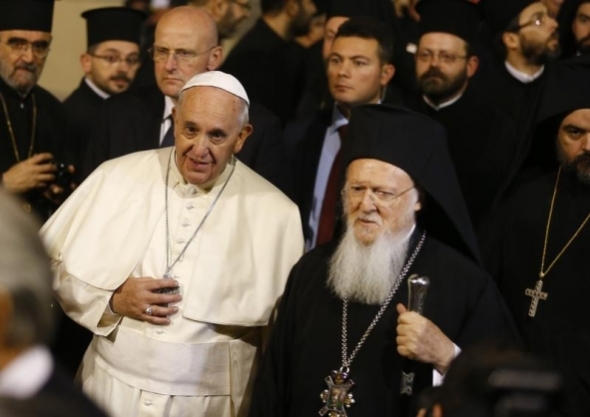 Part of the declaration, as posted in Radio Vaticana, reads: “The tragedy of forced migration and displacement affects millions, and is fundamentally a crisis of humanity, calling for a response of solidarity, compassion, generosity and an immediate practical commitment of resources. From Lesvos, we appeal to the international community to respond with courage in facing this massive humanitarian crisis and its underlying causes, through diplomatic, political and charitable initiatives, and through cooperative efforts, both in the Middle East and in Europe.”

The church leaders said that they are in agreement when it comes to wanting peace, and they are ready to promote amicable resolutions to conflicts by means of dialogue. They are pleading for the end of violence and war in the Middle East, and to give way for people to return to their homes.

At the same time, they are urging political leaders to find means so people would stay in their respective homelands and live there in peace and security.

They also acknowledged the need to uphold the law, defend human rights, protect those in minority groups, fight human trafficking, get rid of unsafe routes, and come up with procedures for safe resettlements. They are asking religious communities to continue and increase their efforts in assisting refugees of all faiths. They are also asking countries to be generous and compassionate to those who are trying to flee from war and violence.

“For as long as the need exists, we urge all countries to extend temporary asylum, to offer refugee status to those who are eligible, to expand their relief efforts and to work with all men and women of good will for a prompt end to the conflicts in course,” the said.

The declaration was signed on April 16 in the Greek island of Lesvos.

Most viewed articles
Living with Cunning People135
When Apples Are Sometimes Oranges87
The Tree Heals the Tree70
The Synodal Residence in New York hosts the Council of Bishops of the Russian Orthodox Church Outside of Russia58
The work of the Church in society is quiet, but full of hope and love, says the Director of Lumina Publications56
Patriarch Kirill: The Church Prays for the Fraternal Strife to End as Soon as Possible48
Besides intellectual instruction, young people also need prayer, Patriarch Daniel says as new academic year begins28
Voluntary Blood Donation Takes Place in Churches in Serbia26
Most popular authors
Fr. Andreas Agathokleous135
Pravmir.com team132
Archpriest Michael Gillis87
Archpriest Stephen Freeman70
Ștefana Totorcea56
Aurelian Iftimiu28