Source: eNews Channel
Natalya Mihailova | 21 March 2016
PARIS - A huge golden dome was hoisted into place Saturday atop a Russian Orthodox cathedral being built in Paris, as Russian and French dignitaries looked on. 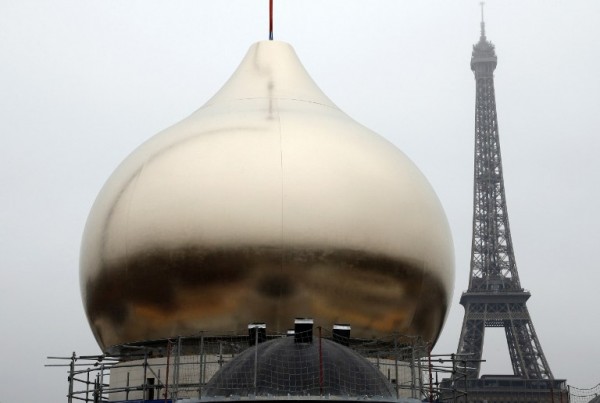 A crane places a cupola on top of the future Russian orthodox cathedral Sainte-Trinite at Quai Branly, near the Eiffel Tower, central Paris, on March 19, 2016. Photo: FRANCOIS GUILLOT / AFP

The cathedral, due to open in October, is part of a Russian Orthodox cultural and spiritual centre under construction on the banks of the Seine that will share the Paris skyline with the Eiffel Tower.

When completed the centre will house a bilingual school and cultural services of the Russian embassy.

A crane lifted the eight-tonne dome into place, the first of five golden cupolas that will adorn the Russian Orthodox Holy Trinity Cathedral at Quai Branly.

A total of 90,000 sheets of gold leaf will cover the five domes.

Among those attending the event, alongside officials, churchgoers and journalists, were French architect Jean-Michel Wilmotte and the cathedral’s eventual head, Bishop Nestor.

French authorities gave permission in 2013 for the new Russian Orthodox cathedral to be built.

However the initial plan dates back to 2007 when Alexy II, the now deceased patriarch of Moscow, visited France and said the Russian Orthodox Church wanted a bigger edifice in Paris.

Russia acquired a prime parcel of land in 2010 near the Eiffel Tower after the French state-run meteorological office sold its headquarters.

Initially the plans for the five golden domes flanked by a wavy glass canopy resembling a veil ran into opposition from the city’s then Socialist mayor, Bertrand Delanoe, who called the design “mediocre architecture conceived in haste”.

But a revised plan drawn up by Wilmotte was finally given the go-ahead.

Paris is already home to several Russian Orthodox churches but only one, the Cathedral of Three Saints Doctors, is under the control of the Moscow Patriarchate.