Gone is the Glory of Constantinople… But Christ Remains

Source: Notes on Arab Orthodoxy
God is a wanderer who does not settle in one place. He does not require people to come to Him in a specific place. He comes to them whenever they call upon Him and seek Him.
Fr. Georges Massouh | 25 July 2015 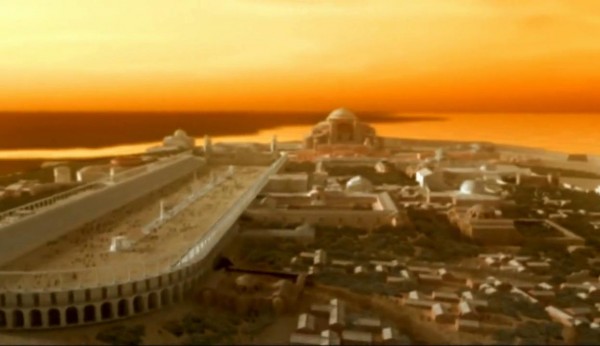 Jesus announced that the worship of God is not tied to a specific place as God is not contained by space and He cannot be bound in an exclusive place toward which those who want to be in His presence must pray or make pilgrimage. Thus when the Samaritan woman asked Him, “Our fathers worshiped on this mountain (Gerezim in Samaria), and you Jews say that in Jerusalem is the place where one ought to worship,” Jesus answered her, “Woman, believe Me, the hour is coming when you will neither on this mountain, nor in Jerusalem, worship the Father… the true worshipers will worship the Father in spirit and truth” (John 4:20-23).

God is present in every place and there is no place on the face of this earth from which God is absent. God is present where His people gathers in His name. The Apostle Paul affirms this when he says, “I shall dwell in them and walk among them. I shall be their God and they shall be My people” (2 Corinthians 6:16). God is a wanderer who does not settle in one place. He does not require people to come to Him in a specific place. He comes to them whenever they call upon Him and seek Him.

In this context, Saint Basil the Great (d. 379) comments on Jesus’ words to the Samaritan woman and says that worship is no longer tied to a specific geographical location since the Holy Spirit has become the “place of worship”. Christ also is the place of worship and the Gospel of Saint John clearly speaks of the end of worship in the temple of Jerusalem since Jesus Himself is the new “temple” and there is no need for a temple built in a city or on a mountain.

When the Jews asked Jesus for a sign, He answered them, “‘Destroy this temple and in three days I will raise it up… ‘ But He was speaking of the temple of His body. Therefore, when He had risen from the dead, His disciples remembered that He had said this to them” (John 2:18-22). Jesus came. He became man. He destroyed death. He fulfilled the prophecies. He abrogated Judaism. He ended exclusivity. He rejected being closed off. He fought racism. He established a new covenant. He made everything new.

Therefore Christianity does not believe in holy lands as opposed to non-holy lands. All the earth is called to holiness through the effort of those living upon it to sanctify themselves. Holiness belongs to humans, not to land. Man, not dust, is holy. Man– not mountains, not lakes, not rivers, not plains– is called to eternal life. Man– and not any other created thing– is the image of God, called to be His likeness. Man is the highest value, for the sake of which God created everything, not vice versa.

However, Christianity is a religion that believes in the incarnation and thus in the connection between faith and bearing witness and the local church which exists in a specific geographic space. The Epistle to Diognetus affirms the connection between these two things. This epistle was composed in the late 2nd century by an unknown Christian author for a pagan named Diognetus who held an important position in the Roman Empire and had asked the writer for a letter to explain Christianity and Christians and especially to explain the God of the Christians, how they glorify Him, and why Christians do not fear dying for their faith. The style of the Epistle shows that its author was a cultured person skilled in the Greek language and rhetoric in addition to theology.

The Epistle says, “For Christians are not distinguished from the rest of mankind either in locality or in speech or in customs.For they dwell not somewhere in cities of their own, neither do they use some different language, nor practice an extraordinary kind of life…  But while they dwell in cities of Greeks and barbarians as the lot of each is cast, and follow the native customs in dress and food and the other arrangements of life, yet the constitution of their own citizenship, which they set forth, is marvelous, and confessedly contradicts expectation. They dwell in their own countries, but only as sojourners; they bear their share in all things as citizens, and they endure all hardships as strangers. Every foreign country is a fatherland to them, and every fatherland is foreign.”

Most viewed articles
How to Read the Bible169
Words from St. Isaac of Syria122
Patriarch Kirill Encourages the Media to Report Proper and Adequate Information about the Church114
Since the Start of the Pandemic Moscow Priests Have Made Over 4,000 Visits to Patients with COVID-1986
Archbishop Peter of Chicago and Mid-America in an interview to Poltava Diocese’s press service reveals interesting moments in the life of St John (Maximovich)83
“Do Not Weep”66
Best Films of the Pokrov Film Festival Have Been Determined42
Using Our Time Wisely to Cultivate the Seeds of Faith2
Christ the Life Giver1
Most popular authors
Pravmir.com team325
Archpriest Lawrence Farley169
Archpriest Stephen Freeman122
Archpriest Peter Olsen66
Priest Luke A. Veronis2
Fr. Theodore Stylianopoulos1