Source: OrthoCuban
It is when I read stories like the story of Meriam that I realize how thankful I am that we Americans may scream a lot, but we have not yet descended to physically harming each other.
Priest Ernesto Obregon | 27 July 2014 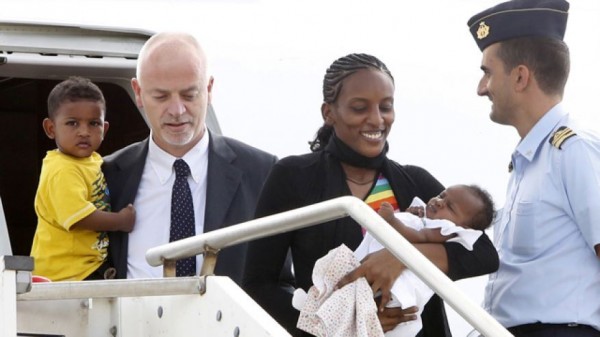 July 24, 2014: Meriam Ibrahim disembarks with her children Maya, in her arms, and Martin, accompanied by Italian deputy Foreign Minister Lapo Pistelli, after landing at Ciampino’s military airport on the outskirts of Rome. (AP Photo/Riccardo De Luca)

Some good news arrived today on the international front. As many of you are aware, there is a Sudanese woman, Meriam Ibrahim, married to an American citizen who was grabbed by regional Sudanese authorities, tried, and sentenced to death for converting to Christianity. According to the way in which the Sudanese apply Sharia law, because her father was Muslim, Meriam is Muslim. Any Muslim who converts away from Islam is worthy of the death penalty, and so she was sentenced to death while pregnant. Fortunately for Meriam, she had been grabbed by authorities and not by a mob, so the sentence was not carried out while she appealed it. Eventually she won her appeal and was set free, however, she was promptly arrested again at the airport under some trumped up charge of trying to use false travel documents. Meriam was released on bail and was able to go to the USA Embassy and get asylum.

Details are not out yet, however, Italy admitted that it had had a part in getting Meriam and her family out. She landed at the airport in Rome, accompanies by her children and an Italian MP [Member of Parliament]. The Italian Prime Minister greeted her shortly after her arrival. Whatever happened, her own lawyer in the Sudan was not aware that she was leaving. On interview, he said that the legal travel ban against her was still in effect. I doubt that any European country or the USA will honor any extradition request. She is fortunate in being married to an American citizen. I am sure that the USA will waive the normal procedures and give Meriam a green card under a sped up case review allowed by law for those with a particular emergency refugee need. Being originally sentenced to 100 lashes and then the death penalty for being a Christian is most definitely an emergency need. Meanwhile, a very special thanks to the government of Italy. They deserve all our applause.

The world is in a period of radicalization. From the returning Caliphate, to the separatists in the Ukraine, to the radicalization of Muslims in northern and sub-Saharan Africa, to the increasing militancy of Hindus in India, we are seeing a world that may very well be headed toward some type of social/cultural explosion. We have not been immune from that climate here in the USA. However, our disagreements have been merely loud and obnoxious. Our elections are now ugly in a way they were not before. Constant legal challenges face every law. Our national leadership is no leadership. Both our Court and our Congress continually give divided decisions that hinge on a few votes. As a result, the decisions of the Court are less and less respected, while the Congress lurches from crisis to crisis. Nevertheless, we remain free of physical conflict and internal terrorism. For that we are to be thankful. It is when I read stories like the story of Meriam that I realize how thankful I am that we Americans may scream a lot, but we have not yet descended to physically harming each other. And, the few times that an American has tried an act of mass harm, all political sides unite and chase the persons until caught.

There are many countries that have not felt violent social upheaval. May the Lord continue to preserve them. May all of us countries who merely have strong verbal disagreements keep them as merely verbal disagreements. May our God help bring peace to those countries in violent conflict. As the troparion says:

O Lord, save Thy people and bless Thine inheritance, granting to Thy people victory over all their enemies, and by the power of Thy Cross preserving Thy Kingdom.

Christ is risen from the dead, trampling down death by death, and upon those in the tombs bestowing life.