Source: Interfax-Religion
Natalya Mihailova | 29 July 2014
Donetsk, July 29, Interfax - The center of Gorlovka again came under an artillery attack at 10 a.m. on Monday, Christianization of Rus Day, one shell fell and exploded on the premises of the diocesan authority, the Gorlovka Diocese said. 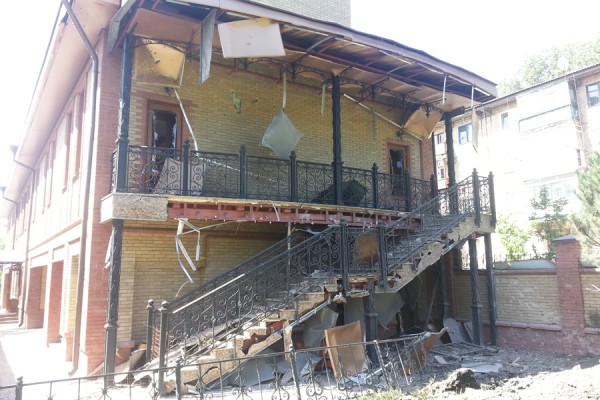 “None of the employees was hurt: the attack took place during a worship service, when everyone was inside the cathedral. It was a miracle that a watchman who was in a utility building next door survived,” the diocese said in a statement on its website.

On a neighboring street, a man died after his leg was torn off.

On the diocesan authority premises, the outside stairs and facade of the main building and an outdoor gas pipe were damaged, windows were smashed in some of the buildings, and the lawn fence was mangled.

Shell explosions and splinters damaged nearby five-story buildings, setting one of them on fire.

“The Church prays for the quickest possible recovery of the injured, for peace for the souls of those killed, for this fratricidal war to come to the earliest possible end, and for inviolable peace. May the Lord strengthen the grief-stricken families. God grant that we should survive this time of trouble and remain human,” the diocese said.