Great and Holy Thursday: A Homily by St. John Chrysostom 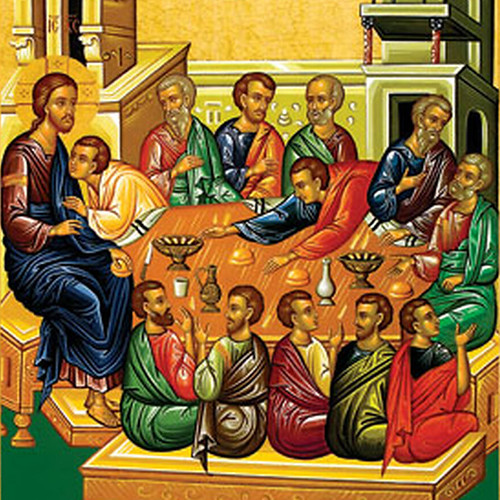 On the day in which our Lord instituted Holy Communion, this great saint warns us not to approach casually, but to wash ourselves of our sins as our Lord washed the feet of His disciples.

How many now say, I would wish to see His form, the mark, His clothes, His shoes. Lo! thou seest Him, Thou touchest Him, thou eatest Him. And thou indeed desirest to see His clothes, but He giveth Himself to thee not to see only, but also to touch and eat and receive within thee.

Let then no one approach it with indifference, no one faint-hearted, but all with burning hearts, all fervent, all inspired. For if Jews standing, and having on their shoes and their staves in their hands, ate with haste, much more oughtest thou to be watchful. For they indeed were to go forth to Palestine, wherefore also they had the garb of pilgrims, but thou art about to remove unto Heaven.

Wherefore it is needful in all respects to be vigilant, for indeed no small punishment is appointed to them that partake unworthily.

Consider how indignant thou art against the traitor, against them that crucified Him. Look therefore, lest thou also thyself become guilty of the body and blood of Christ. They slaughtered the all-holy body, but thou receivest it in a filthy soul after such great benefits. For neither was it enough for Him to be made man, to be smitten and slaughtered, but He also commingleth Himself with us, and not by faith only, but also in very deed maketh us His body. What then ought not he to exceed in purity that hath the benefit of this sacrifice, than what sunbeam should not that hand be more pure which is to sever this flesh, the mouth that is filled with spiritual fire, the tongue that is reddened by that most awful blood? Consider with what sort of honor thou wast honored, of what sort of table thou art partaking. That which when angels behold, they tremble, and dare not so much as look up at it without awe on account of the brightness that cometh thence, with this we are fed, with this we are commingled, and we are made one body and one flesh with Christ. “Who shall declare the mighty works of the Lord, and cause all His praises to be heard?” (Ps. 106:2). What shepherd feeds his sheep with his own limbs? And why do I say, shepherd? There are often mothers that after the travail of birth send out their children to other women as nurses; but He endureth not to do this, but Himself feeds us with His own blood, and by all means entwines us with Himself.

Mark it, He was born of our substance. But, you say, this is nothing to all men; though it does concern all. For if He came unto our nature, it is quite plain that it was to all; but if to all, then to each one. And how was it, you say, that all did not reap the profit therefrom. This was not of His doing, whose choice it was to do this in behalf of all, but the fault of them that were not willing. With each one of the faithful doth He mingle Himself in the mysteries, and whom He begat, He nourishes by Himself, and putteth not out to another; by this also persuading thee again, that He had taken thy flesh. Let us not then be remiss, having been counted worthy of so much both of love and honor. See ye not the infants with how much eagerness they lay hold of the breast? with what earnest desire they fix their lips upon the nipple? With the like let us also approach this table, and the nipple of the spiritual cup. Or rather, with much more eagerness let us, as infants at the breast, draw out the grace of the spirit, let it be our one sorrow, not to partake of this food. The works set before us are not of man’s power. He that then did these things at that supper, this same now also works them. We occupy the place of servants. He who sanctifieth and changeth them is the same. Let then no Judas be present, no covetous man. If any one be not a disciple, let him withdraw, the table receives not such. For “I keep the passover,” He saith, “with my disciples” (Mt. 26:18).

This table is the same as that, and hath nothing less. For it is not so that Christ wrought that, and man this, but He doth this too. This is that upper chamber, where they were then; and hence they went forth unto the mount of Olives.

Let us also go out unto the hands of the poor, for this spot is the mount of Olives. For the multitude of the poor are olive-trees planted in the house of God, dropping the oil, which is profitable for us there, which the five virgins had, and the others that had not received perished thereby. Having received this, let us enter in that with bright lamps we may meet the bridegroom; having received this, let us go forth hence.

Let no inhuman person be present, no one that is cruel and merciless, no one at all that is unclean.

Easter, the feast of feasts

If any be pious and a lover of God, let him partake of this fair and radiant festival.…